The White House on Thursday confirmed that President Donald Trump will meet with Russian President Vladimir Putin at the Group of 20, or G-20, summit next week in Germany, according to reports.

This would be their first in-person meeting. 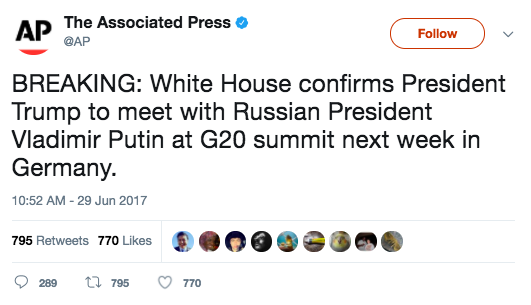 National Security Adviser H.R. McMaster confirmed that Trump will meet Putin on the “sidelines” of the summit, the Associated Press reported, and that his itinerary will include meetings with several world leaders.

The G-20 summit a forum for governments and central banks from 20 major economies, and it will meet in Hamburg, Germany, on July 7 and July 8.

Trump and Putin have never met, but their names have been used in the same sentences for months now, as the U.S. Senate Intelligence Committee has been investigating the alleged Russian hacking of the 2016 Presidential election.

The President has denied allegations that any of his associates were in contact with Russian officials during the election or following it, during the transition period.

Trump has also vehemently denied having anything to do with the alleged Russian hacking, and has taken to Twitter on more than one occasion to defend himself against the political “witch hunt” targeting him where it concerns allegations he colluded with the Russians.

Department of Homeland Security officials recently testified before the Senate committee that Russia went after elections-related systems in 21 states prior to the 2016 Presidential election, but that those systems were not involved in vote tallying.

Earlier this month, former FBI Director James Comey testified under oath before the Senate Intelligence Committee that Russia “no doubt” intervened in the 2016 Presidential election, and that President Trump did not obstruct the investigation or ask that it be stopped.