Trump: The Russia investigation is turning into Presidential ‘witch hunt’ with ‘zero proof’

Special counsel Robert Mueller is investigating whether or not President Donald Trump attempted to obstruct justice where it concerns the Russia investigation, according to officials – and the President is calling it out on social media.

“They made up a phony collusion with the Russians story, found zero proof, so now they go for obstruction of justice on the phony story. Nice,” Trump tweeted on Thursday. 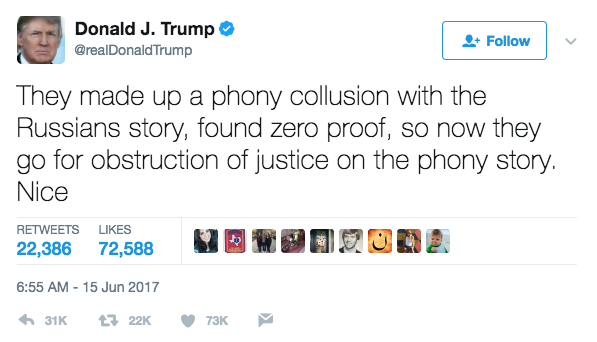 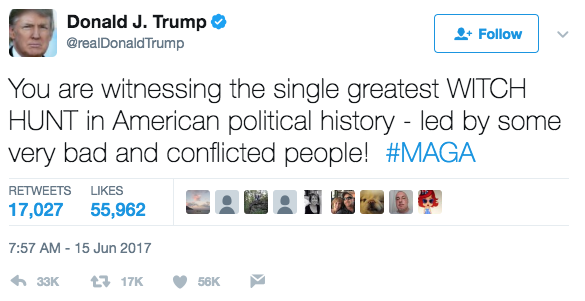 The Russia probe has been front and center in recent weeks, as the Senate Intelligence Committee has continued its investigation into Russia’s alleged hacking of the 2016 Presidential election, and the public hearings have been highly publicized and scrutinized. The Russia investigation has been ongoing for about a year now.

Former FBI Director James Comey was fired from his post for in May to relieve pressure surrounding the Russia investigation, he later learned.

Earlier in the year, Comey had told Trump that the President was not personally under investigation at the time.

Comey also testified under oath in front of the Senate Intelligence Committee earlier this month that President Trump did not “obstruct” Comey or ask that he stop the Russia investigation.

Newt Gingrich tweeted on Thursday that “Mueller is setting up a dragnet of obstruction, financial questions and every aspect of Trump’s life and his associates lives.” 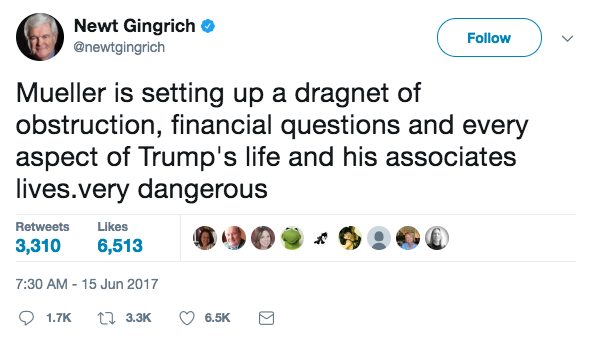