A Russian Su-30 fighter jet on Saturday buzzed and provoked a U.S. Navy aircraft while it was flying routinely over the Black Sea, according to reports.

The Moscow-based Sputnik News claimed the Russian jet was “intercepting” the U.S. spy plane because it was reportedly “approaching the Russian state border in the Black Sea, according to Moscow.”

The Russian jet crossed 50 feet in front of the Navy P-8A Poseidon aircraft while engaging its afterburners, which forced the P-8 to enter its jet wash and caused “violent turbulence,” Fox News reported, pointing out that the incident lasted for 24 minutes.

“The US aircraft was operating in international airspace and did nothing to provoke this Russian behavior,” Pentagon Spokeswoman Lt. Col. Michelle Baldanza told CNN. 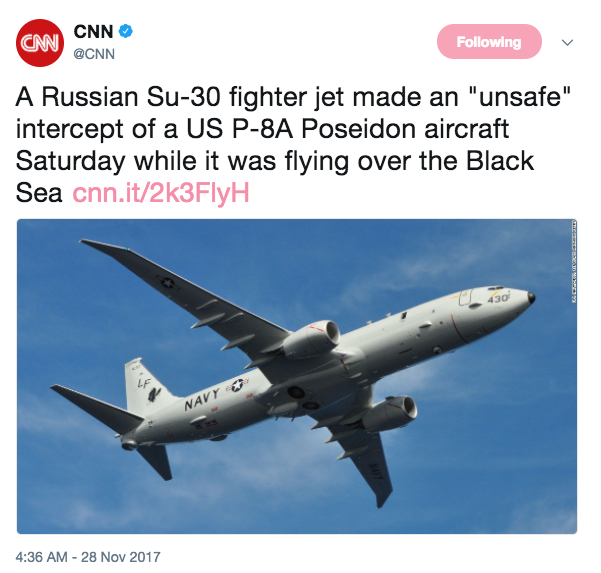 The jet’s actions were “unsafe,” especially since they caused the Navy P-8 to “experience ‘a 15-degree roll and violent turbulence,'” Baldanza told CNN.

“Unsafe actions‎ have the potential to cause serious harm and injury to all air crews involved,” she also told CNN.

This is not the first time a Russian jet has buzzed a U.S. plane, especially as the United States, Russia and NATO all operate in the area of the Black Sea.

The last “buzzing” encounter was in June, when an armed Russian fighter jet buzzed an Air Force reconnaissance aircraft over the Baltic Sea. That came just one day after Russia said it would “target” American aircraft following the U.S. downing a Syrian plane over the previous weekend.

A Russian Su-27 jet approached an Air Force RC-135 recon jet “rapidly,” and missiles were under its wings, the officials had told Fox News, noting that the Su-27 came within five feet of the American aircraft.

“Once alongside, the Russian jet was ‘provocative’ in its flight maneuvers and flying ‘erratically,’ according to another official,” Fox had reported.