Officials: Armed Russian jet gets within 5 feet of an Air Force recon jet

U.S. officials have told Fox News that an armed Russian fighter jet “buzzed” an Air Force reconnaissance aircraft on Monday in the Baltic Sea – this just one day after Russia said it would “target” American aircraft following the U.S. downing a Syrian plane over the weekend.

A Russian Su-27 jet approached an Air Force RC-135 recon jet “rapidly,” and missiles were under its wings, the officials told Fox News, noting that the Su-27 came within five feet of the American aircraft.

“Once alongside, the Russian jet was ‘provocative’ in its flight maneuvers and flying ‘erratically,’ according to another official,” Fox reported.

But this one was “unsafe,” one official told Fox News.

It also comes one day after the Russia Defense Ministry said it would come after American aircraft and “target” them, following the downed Syrian plane over the weekend. 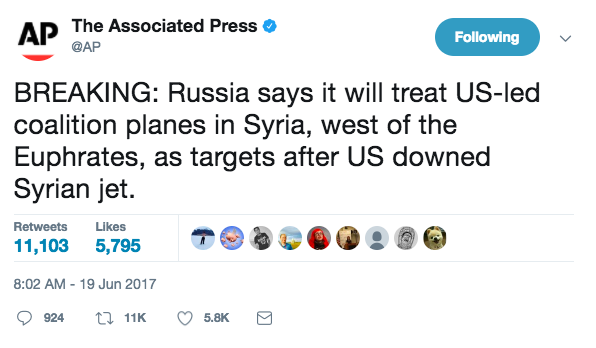 Russia lashed out on Monday at the United States following the U.S. Navy shooting down a Syrian aircraft that was attacking ISIS-fighting rebel forces, and said it will treat any U.S. aircraft as “air targets” after this “massive violation of international law.”