Trivalent wants to bring NSA-approved cybersecurity to your personal lives

There’s a new technology out there that uses National Security Agency-approved data protection to encrypt and fractures files into tiny pieces and fragments across hard drives, clouds, phones or laptops – making it virtually impossible for a hacker to gain access. If this sounds like something unique, that’s because it is.

Data protection company Trivalent has a proprietary technology that could change personal data security standards, so that anyone might be able to utilize the same data protection that’s good enough for the National Security Agency (NSA), and beyond.

“No matter where data goes, it’s protected,” Trivalent co-founder and CSO Rick Bueno explained to American Military News. “It’s exactly the same technology that’s being used for and was certified under the NSA. It’s not watered down.”

In other words, the same data protection technology approved by the NSA and used by the government and large companies could some day trickle down onto “everyday” devices, such as a cell phone, and into the healthcare system to protect patients’ health information.

And ask most Americans if they would like their sensitive, private information to remain such – private and protected – and they would likely say “yes” in a heartbeat.

Given the recent global cyberattack across Europe and United States, as well as the ransomware virus in May that affected hundreds of thousands of computers throughout Europe and Asia, including those at hospitals and trusts across England, people are becoming increasingly interested in protecting their information.

They would also probably have no idea exactly how such an intangible thing is kept secure in the first place.

Confidential data stored on the internet or on networks is protected through encryption, which is a process that uses algorithms to convert information into codes only authorized users can understand, and it should prevent unauthorized access. Think: creating a new message that only authorized parties would be able to decipher.

Enter Trivalent, a data protection company that recently partnered with iGov, which provides systems and support to federal clients. Notably, Trivalent is the only NSA-approved company, currently.

Trivalent is coming into the game with never-before-seen technology and big plans to change not only government and Defense cyber security, but also that of the everyday person. The scalability of its product is something Trivalent is proud of, and rightfully so. No other company seems to be doing what Trivalent does.

The technology Trivalent uses is entirely scalable and not dependent on Internet or network connections. 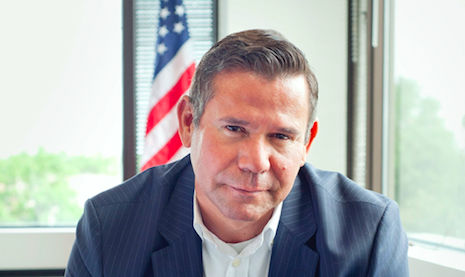 Trivalent is a software product company founded in 2010 that focused on developing commercial products that have “operationally expandable features,” Bueno recently told American Military News. The company formed to address “real needs that weren’t being met, real needs for the defense industry,” he said.

Trivalent is not a defense contractor, Bueno pointed out. It is a modest company based in Annapolis, Maryland, of about 35 people combining veterans, military operations and acquisitions with commercial product and management; think software people, the NSA and the Department of Defense. It is a quite a team.

The hybrid model of their company shows a “clear balance of how to build software products that can go from the private to the public sector, and scratches an itch that we’re seeing across the entire landscape,” Bueno said – the need for data protection.

“On the defense side, our value there is protecting classified data on any device,” Bueno said.

But when it comes to expansion and scalability, Trivalent would “quickly make grounds” in the healthcare system, especially when it comes to someone trying to steal HIPPA-protected (Health Insurance Portability and Accountability Act) data.

“Most people think encryption” when they think about data protection, Bueno said. “We use it as a tool, but that’s not the real value. Encryption is like potato chips – it’s everywhere.”

Bueno developed the cybersecurity technology for the Department of Defense, Special Forces and Intelligence communities.

He recently told American Military News about Trivalent’s data protection, and the exciting things on the horizon for cyber security.

“We take a file [for example, a Word document]. We’ll encrypt it to wrap it. Then we add a really interesting technique that randomly fractures the file into a bunch of pieces,” Bueno explained. “Every time we touch it, we do it in a different way.”

“It’s not the same kind of fracture,” Bueno continued. “The algorithms are different.”

“Then we go in and have the ability to disperse those fractures and threads into different locations. They can be in different areas on the same hard drive, or across clouds, phones or laptops,” he pointed out. “Wherever you want to put them [the file pieces], we can put them.”

What makes Trivalent’s technique unique – and more secure – is that it and authorized users are the only thing that can then re-combine the fragments into the original form – that Word document, for example.

The technology that Trivalent uses “sticks to the data,” Bueno said. “The security travels with those threads.”

“The only entity that can recombine the thing [the document or information] are the ones authorized to do so, using a number of different techniques,” he explained.

Bueno pointed out that Trivalent has the only NSA approved encryption for Android in the United States, and is about to have the same for Windows.

While its competitors tried to do something similar to Data Alchemy, it “didn’t work,” Bueno said.

“We worked early with NSA security to understand what their requirements were so it could be top secret,” he explained. “We were the first ones in, and the only ones on there [the list of approved NSA companies].”

It has been two years since Trivalent received its NSA approval, and still, “as far as rigor and certifications, we’re the only ones,” Bueno added.

This is what makes Trivalent’s partnership with iGov particularly exciting.

“We’re small, and they’re fast movers,” Bueno said, adding that iGov has a “great perspective into the Defense and Special Forces sectors, and recognized the value of what [Trivalent] is bringing [to the table] in a cost-effective way.”

With their new agreement, iGov will become a re-seller of Trivalent’s product.

This allows Trivalent to continue to focus on where it brings the most value – its data protection, whether it’s “data at rest, data at use or data in motion.”

“Because iGov is working so closely with the same customers and more, they can provide perspective on what the customer is looking for,” Bueno said. “It’s a great soundboard.”

And it also increases the likelihood of adoption of the product.

Trivalent is coming into the game and absolutely “disrupting the market for the Department of Defense,” Bueno pointed out.

“It is definitely not a parochial approach to how you do data protection,” he said.

Because Trivalent was innovative and first to market, it was able to create a product that is cost-effective, mitigates risks and meets top security standards.

And this “360-degree disruption” to data protection is what has made Trivalent incredibly successful, Bueno added.