[UPDATE] 2:30 p.m. EST – Fox News reported that a total of 12 countries across Europe and Asia had been affected by the cyber attack on Friday. They also said that the attack apparently involved a hacking tool from the NSA that was leaked in 2016.

Theresa May also released a statement:

We are aware that a number of NHS organisations have reported that they have suffered from a ransomware attack.

This is not targeted at the NHS, it’s an international attack and a number of countries and organisations have been affected.

The National Cyber Security Centre is working closely with NHS digital to ensure that they support the organisations concerned and that they protect patient safety.

And, we are not aware of any evidence that patient data has been compromised.

[UPDATE] 12:00 p.m. EST – BBC reported that systems in Wales and Scotland are believed to be unaffected. The areas affected are London, Blackburn, Nottingham, Cumbria, Derbyshire, Northumbria, Blackpool and Hertfordshire. 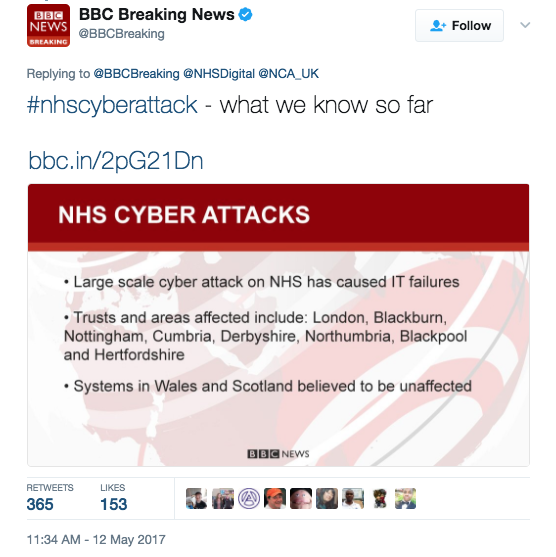 On Friday, a large-scale cyber attack hit NHS hospitals across England by hackers demanding random, the Telegraph reported. Hospitals affected have lost use of phone lines and computers. The BBC reported that so far the NHS IT failure has affected the trusts and hospitals in London, Nottingham, Cumbria and Hertfordshire. According to the Telegraph, a Lister Hospital completely dismantled its telephone and computer system to defend against the attack.

Today the trust has experienced a major IT problem, believed to be caused by a cyber attack.

The trust is postponing all non-urgent activity for today and is asking people not to come to A&E – please ring NHS111 for urgent medical advice or 999 if it is a life-threatening emergency.

To ensure that all back-up processes and procedures were put in place quickly, the trust declared a major internal incident to make sure that patients already in the trust’s hospitals continued to receive the care they need.”Health officials are understood to have declared a major incident and ordered a meeting of national resilience teams.