The Russian Military allegedly “harassed” an American merchant ship in the Baltic Sea in May, according to a report obtained by Defense News.

Defense News recently obtained a copy of an internal report from the M/V Green Ridge ship master, which stated there was an “intense and threatening” encounter on May 25 with Russian helicopters and at least one naval vessel while en route to Lithuania. 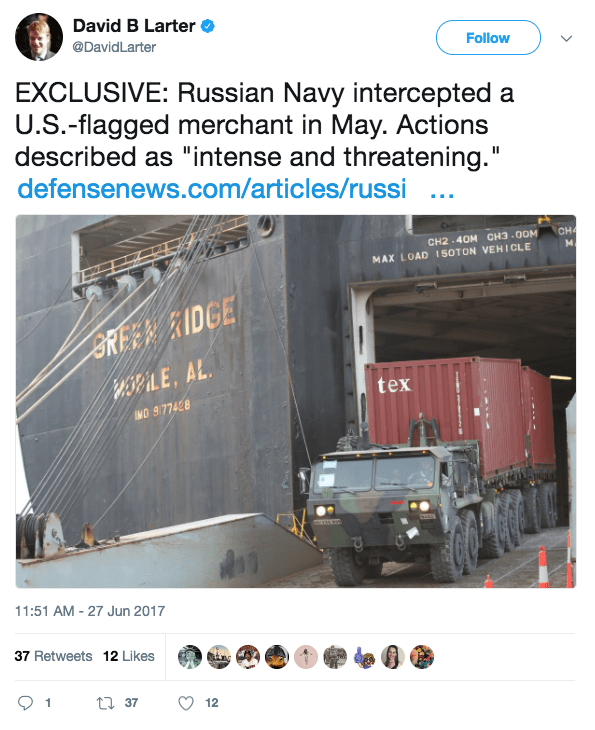 It was unclear how the Russian Military interacted with the Green Ridge during the incident.

U.S. Transportation Command told Business Insider it was aware of the “alleged situation.”

“U.S. aircraft and ships routinely interact with other nations, including Russia, in international seas and waters, and most interactions are safe and professional,” according to U.S Transportation Command, Business Insider reported. “While under [U.S. Department of Defense] contract, commercial shippers are expected to observe these same maritime laws. We expect Russian vessels and aircraft to operate safely and professionally, as well.”

This is not the first time Russia and the U.S. have had “unsafe” or “unprofessional” encounters in the sea or the air.

Since early June, there have been more than 35 encounters between U.S. and Russian jets and ships in the Baltic Sea, according to reports.

That includes a recent encounter where an armed Russian Su-27 jet came within about 30 feet of an Air Force recon plane over the Baltic Sea, when the Russian plane “buzzed” the American aircraft.

That June 19 incident came one day after the Russia Defense Ministry said it would come after American aircraft and “target” them, following the downed Syrian plane over the weekend of June 17 and 18.