There was a multi-stage terror attack in the U.K. on Saturday that killed six people and injured more than 30 others. This was the second terror attack in just two weeks, after the Manchester Arena suicide bomber killed 22 adults and children, and injured many others, after an Ariana Grande concert on May 22.

London Mayor Sadiq Khan said in the fall that terror attacks are “part and parcel” of living in a city, and that its citizens should be prepared.

“That means being vigilant, having a police force that is in touch with communities, it means the security services being ready, but it also means exchanging ideas and best practice,” Khan said previously in an interview.

Since then, Khan has warned of more terrorist attacks – especially in the face of cuts to police budgets.

On Sunday, Khan tweeted that London and its citizens are “shocked and angry today – but this is our city. We will never let these cowards win and we will never be cowed into terrorism.” 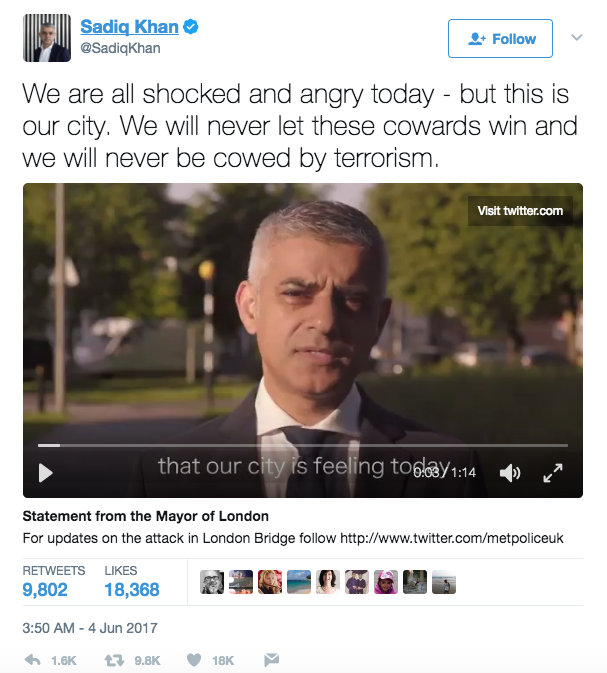 Three jihadi terrorists were eventually killed by police on Saturday during a manhunt that followed the London Bridge attacks.

The terrorists used a white van to mow down people on the iconic bridge, then got out and started stabbing people with 10- to -12-inch blades both on the bridge and in a nearby neighborhood. There was a third stabbing, but it was determined that it was unrelated to terrorism.

The London Police believe that they have killed all the terrorists who carried out Saturday’s attack, and that there were not others who got away.