Police have arrested both the brother and the father of the 22-year-old suspected suicide bomber Salman Abedi whose attack Monday at Manchester Arena in the UK killed 22 people and injured 59 others.

Ramadan Abedi, 51, and one of Salman Abedi’s brothers were arrested in Tripoli, Libya, according to reports.

Ramadan Abedi had reportedly protested that his British-born son was innocent and had been preparing to go on a pilgrimage to Saudi Arabia.

“We don’t believe in killing innocents. This is not us,” Ramadan Abedi told the Associated Press in Tripoli. “We aren’t the ones who blow up ourselves among innocents. We go to mosques. We recite Koran, but not that.”

The Daily Mail UK tweeted that Ramadan Abedi insisted his son is “innocent.” 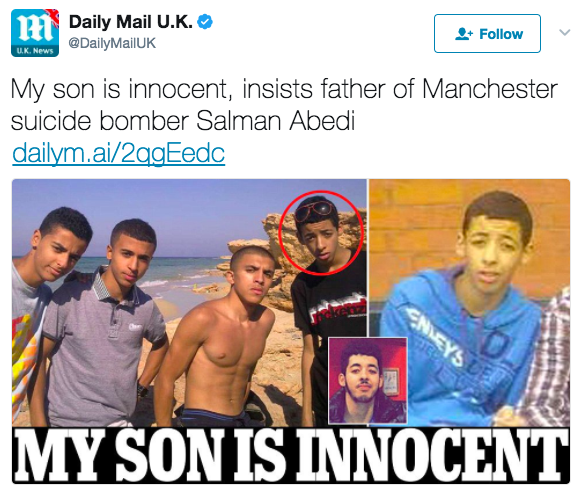 The Islamic State is taking credit for the suicide bomber who set off the explosion Monday at Manchester Arena following an Ariana Grande concert, which police said ultimately killed 22 people – including an 8-year-old girl, and injured 59 people.

This is the deadliest bombing in Great Britain in more than a decade, and the Manchester Arena holds 21,000 people.

Ramadan Abedi said his son sounded “normal” the last time they spoke. “There was nothing worrying at all until two days ago [when] I heard the news that they suspect he was the bomber.”