A U.S. F-15 jet downed an Iranian-made Syrian drone that was armed and in firing range of American troops in southern Syria. 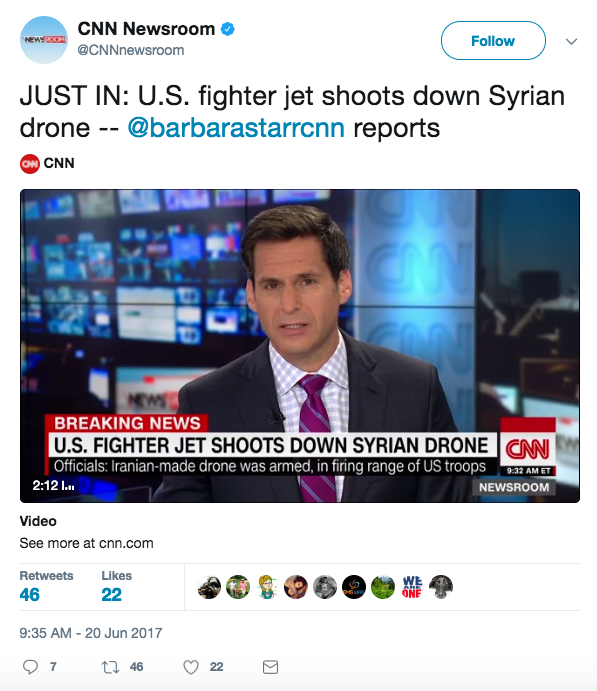 “A U.S. aircraft shot down an armed pro-Syrian regime Unmanned Aerial Vehicle [UAV] advancing on Coalition forces in Southern Syria,” according to a press release from the Coalition.

“The armed pro-regime Shaheed-129 UAV was shot down by a U.S. F-15E Strike Eagle at approximately 12:30 a.m. after it displayed hostile intent and advanced on Coalition forces,” the Coalition said.

“The Coalition forces were manning an established combat outpost to the northeast of At Tanf where they are training and advising partner ground forces in the fight against ISIS,” it continued. “This is the same location where another pro-regime UAV dropped munitions near Coalition forces before it was shot down, June 8.”

The Coalition has made it clear to all parties publicly and through the de-confliction line with Russian forces that the demonstrated hostile intent and actions of pro-regime forces toward Coalition and partner forces in Syria conducting legitimate counter-ISIS operations will not be tolerated.

There is a de-confliction mechanism in place with Russian forces to reduce uncertainty in this highly contested space and mitigate the chances of strategic miscalculation. Given recent events, the Coalition will not allow pro-regime aircraft to threaten or approach in close proximity to Coalition and partnered forces.

The Coalition presence in Syria addresses the imminent threat ISIS in Syria poses globally. The Coalition does not seek to fight Syrian regime, Russian, or pro-regime forces partnered with them, but will not hesitate to defend Coalition or partner forces from any threat.

According to CNN, this is the third time the U.S. has “had to shoot something down” in southern Syria.

The Iranian-made drone “was posing an armed threat” to U.S. and Coalition forces on the ground, CNN reported.

The drone was in a “threatening position,” officials said, according to CNN.

This comes just days after a U.S. F/A-18E fighter jet shot down a Syrian SU-22 fighter jet that was bombing US coalition partners.

A Syrian regime SU-22 military jet aircraft that dropped bombs near Syrian Democratic Forces (SDF) fighters south of Tabqah, Syria, was “immediately shot down by a U.S. F/A-18E Super Hornet aircraft,” according to a press release.

After an initial attack against the SDF fighters around 4:30 p.m. local Syrian time on Sunday, “the Coalition contacted its Russian counterparts by telephone via an established ‘de-confliction line’ to de-escalate the situation and stop the firing,” the U.S. Navy said.

Earlier Tuesday, a Russian jet came within five feet of a U.S. Air Force recon jet over the Baltic Sea.