The Navy Is Sending Its Third Carrier Strike Group To The Western Pacific, North Korea

The United States is sending additional carrier strike group enforcement into the Western Pacific, as the Nimitz Group of Carrier Strike Group 11 will depart Thursday to join two other aircraft carriers in a region where, these days, something might happen at any given moment.

“U.S. Navy Carrier Strike Groups routinely deploy to the Western Pacific and the Indian Ocean,” U.S. Navy Public Affairs Officer Lt. Loren Terry told American Military News exclusively. “The USS Nimitz (CVN 68) deployment is all part of a previously planned and detailed maintenance, training and deployment cycle and not in response to any recent specific incident or regional events. Flexibility is one of the key strengths of naval power and it allows naval forces to adjust rapidly to cover planned and emergent issues as needed.”

Nimitz is the flagship of the Carrier Strike Group (CSG) 11. The three ships will stop briefly at Naval Air Station North Island to meet up with the other ships and units of CSG 11, the office said, before heading to their final destination.

The strike group units have spent much of the past seven months preparing for deployment, the public affairs office pointed out. 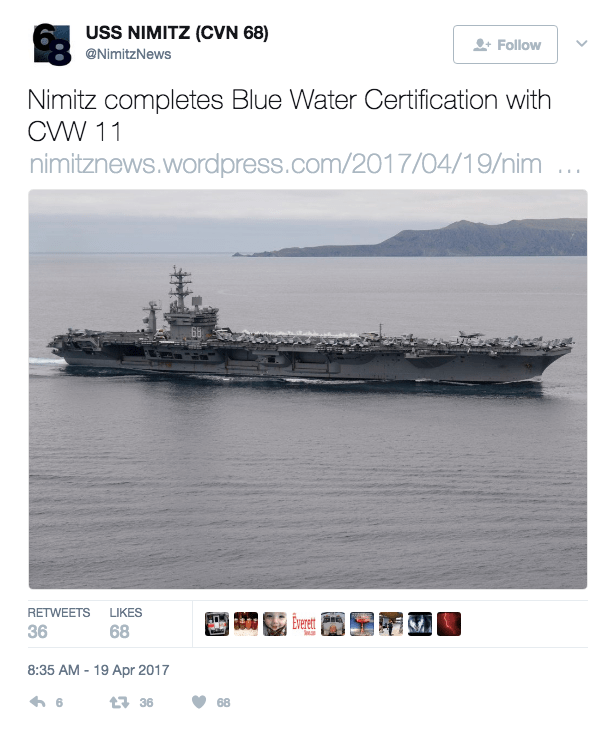 While some reports might suggest that this departure is in response to the imminent North Korean threat, especially given the country’s 12th missile launch test over the past weekend, and that President Donald Trump could be readying to move on the issue, the Navy said it is a regularly scheduled deployment. 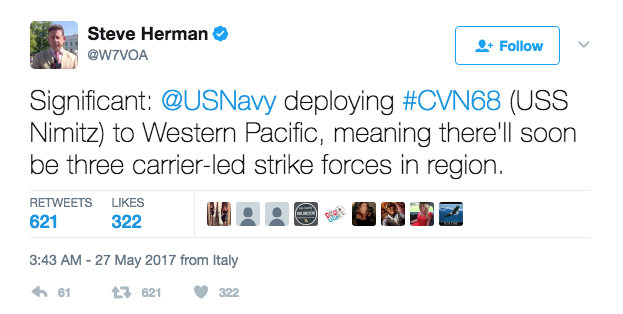 The Nimitz will join the USS Ronald Reagan (CSG 5) and USS Carl Vinson (CSG 1) in the Pacific.

“I am so incredibly proud of the entire Nimitz team and the terrific coordination and support across the entire strike group, especially in such a condensed training cycle,” said Nimitz Commanding Officer Capt. Kevin Lenox. “The crew stepped up to the plate, and I’m confident we’re ready to meet whatever challenges lie ahead on our upcoming deployment.”

North Korea most recently launched its 12th missile this year, and the United States this week tested an interceptor missile, which was a touted as a “critical milestone” and big success.

The Daily Beast reported that sources told both Voice of American and Asahi Shimbun, a Japanese newspaper, that the Nimitz deployment “is meant to serve as a warning to North Korea.”

“The Trump administration deployed the strike force to put pressure on Pyongyang to refrain from more nuclear and missile tests amid mounting concern that it will soon acquire the capability to launch intercontinental ballistic missiles,” Asahi reported.

The Navy maintains that this is a regularly scheduled deployment and not in response to any current events.