North Korea on Sunday launched its 12th missile this year. This is the third missile test in just two weeks.

The country tested a short-range ballistic missile that was controlled by a precision guidance system, and is similar to a Scud missile, or long-range surface-to-surface guided missile, according to reports.

The missile flew about 280 miles and landed in the Sea of Japan. The country of Japan called an emergency press conference and said this missile test was a violation of the United Nations Security Council. 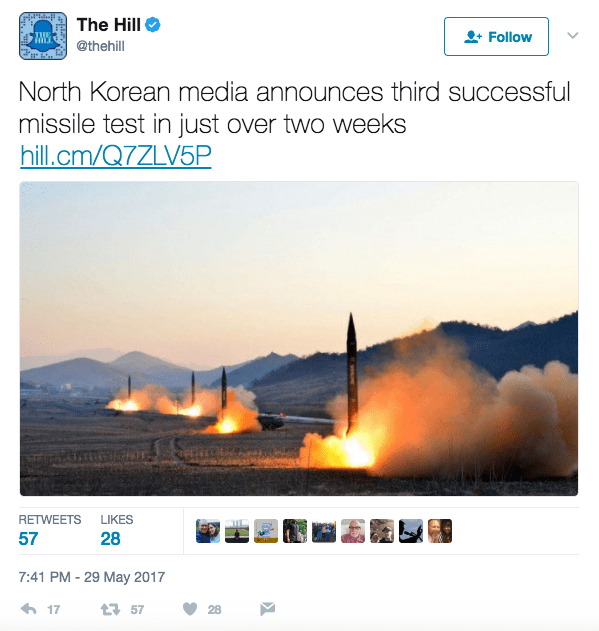 Compared to previous versions of the Hwasong rockets, or what North Korea calls its Scud-like missiles, this missile was equipped with an “advanced automated pre-launch sequence,” according to Reuters.

Two weeks ago, North Korea launched its 11th missile test launch this year, deploying a medium-range ballistics missile (MRBM) Pukkuksong-2, which the country is touted as yet another success.

While reports out of Pyongyang, the capital of the Democratic People’s Republic of Korea, commonly referred to as North Korea, could be considered propaganda, the reports should also be investigated and monitored until proven otherwise.

Pyongyang has continued to expand and test its nuclear and missile programs, citing American aggression as the reason for the weapons.

U.S. Secretary of Defense Jim Mattis told CBS during his “Face the Nation” interview on Sunday that “[t]he bottom line is it would be a catastrophic war if this turns into a combat if we’re not able to resolve this situation through diplomatic means.”