The body of U.S. Army Spc. Antonio I. Moore was returned to Dover Air Force Base, in Delaware on Tuesday night, after a fatal vehicle rollover accident while the man was deployed in Syria.

Moore was deployed in Syria in support of Operation Inherent Resolve. He was killed on Friday when his vehicle rolled over while performing  route clearing operations in the Deir ez Zor Province. In a video the U.S. Army shared with American Military News, Moore’s casket was seen being carried out the loading ramp of a military transport plane by a U.S. Army carry team.

The casket was carried from the plane to a waiting van, in what is known as a Dignified Transfer Ceremony.

Moore, who was 22 when the fatal incident occurred, had enlisted in the Army in May 2017 and trained as a combat engineer.

He was assigned to the 363rd Engineer Battalion, 411th Engineer Brigade, a reserve unit based out of Knightdale, NC.

Other images of the casket showed fellow soldiers had removed their name tapes and unit patches and placed them on Moore’s casket before it was flown back to the U.S. 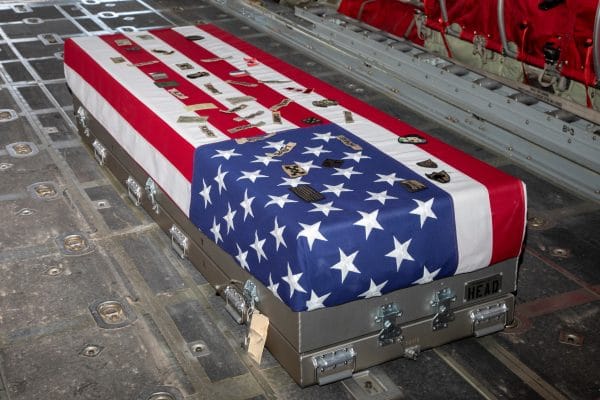 Fellow soldiers placed the nametapes from their uniforms and
their unit patches on Spec. Antonio Moore’s casket prior to the dignified
transfer of remains on Saturday, January 25, 2020. (US Army photo by
Spec. Angel Ruszkiewicz)

“The 363rd Engineer Battalion is deeply saddened at the loss of Spec. Antonio Moore,” Doiron said Saturday. “Antonio was one of the best in our formation. He will be missed by all who served with him. We will now focus on supporting his family and honoring his legacy and sacrifice.”

Moore was reportedly on his first deployment when the accident happened.

Moore had been decorated with the National Defense Service Medal and the Army Service Ribbon.

He is survived by his mother, stepfather, three brothers and a sister.

On Sunday NC Governor Roy Cooper tweeted his condolences at the news of Moore’s death.

Cooper also called for flags to be flown at half staff throughout the state, in remembrance of Moore.