Pompeo had a working dinner with Chol on Wednesday night after he arrived in New York.

The Secretary of State also met with President Trump this week, and there have been meetings between U.S. and North Korean officials taking place in the Demilitarized Zone on the Korean Peninsula, as well, all in an international effort to try and save the historic summit between the two nations.

The Secretary of State posted photos of himself and Chol to his Twitter account, including a description of what the two had to eat.

“Good working dinner with Kim Yong Chol in New York tonight. Steak, corn, and cheese on the menu,” he wrote.

There were the two photos posted: 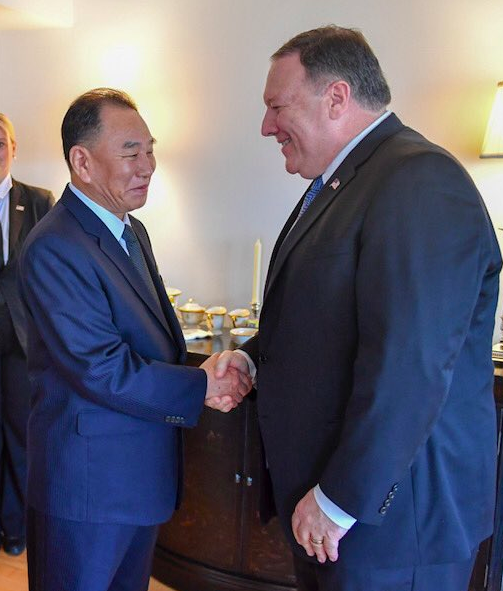 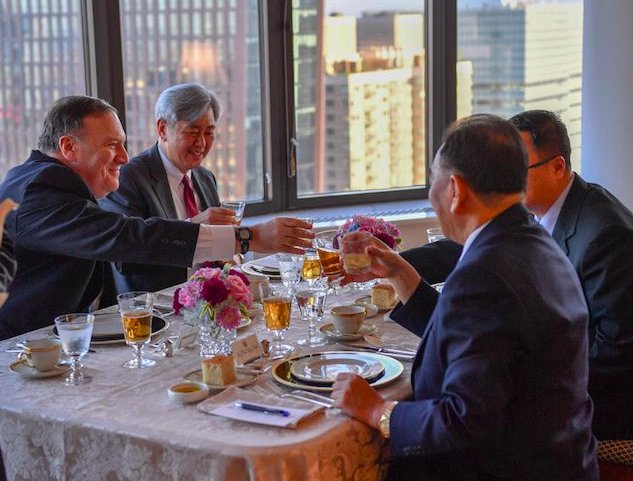 Pompeo on Thursday tweeted that the potential summit “presents … a great opportunity to achieve security and economic prosperity.”

The potential summit between @POTUS and Chairman Kim presents #DPRK with a great opportunity to achieve security and economic prosperity. The people of #NorthKorea can have a brighter future and the world can be more peaceful.

The goal of a summit between North Korean and the U.S. would be complete and verifiable denuclearization of the Korean Peninsula, officials have said.

There is no confirmation, but there is speculation that the previously scheduled June 12 summit between Trump and Kim could be back on the table, or that a meeting could take place on a different date.

Trump confirmed Tuesday that a high-ranking North Korean official was coming to the United States to for talks about an upcoming potential summit between the President and Kim Jong Un.

The President last week canceled the June 12 summit with the North Korean leader in Singapore. Since then, there has been some international back-and-forth about meetings and now, possibly bringing the summit back on the table.

“We have put a great team together for our talks with North Korea. Meetings are currently taking place concerning Summit, and more. Kim Young Chol, the Vice Chairman of North Korea, heading now to New York. Solid response to my letter, thank you,” the President tweeted.

Vice Chairman Kim Young Chol, a four-star general, would be the highest-ranking North Korean official to visit the U.S. since 2000. Chol was expected to land Wednesday afternoon around 2 p.m. EST in New York.

Trump last week announced he was canceling the anticipated summit over new hostilities North Korea had expressed through its state media.

Then on Friday, the President said the U.S. is “talking to” North Korea again.

North Korea had issued a statement Thursday night that it was willing to meet “at any time” after Trump nixed the Singapore summit.

“Very good news to receive the warm and productive statement from North Korea. We will soon see where it will lead, hopefully to long and enduring prosperity and peace. Only time (and talent) will tell,” Trump tweeted Friday morning.

North Korea on Thursday issued a statement and said it still wanted to resolve issues with the United States, the state-run news agency KCNA had reported.

Then, over the weekend, there was a surprise meeting between North and South Korean officials, which was reportedly requested by Kim Jong Un, to discuss reviving the summit.

On Thursday, Trump canceled the upcoming summit in Singapore with Kim Jong Un, and the White House issued a letter to North Korea:

We greatly appreciate your time, patience, and effort with respect to our recent negotiations and discussions relative to a summit long sought by both parties, which was scheduled to take place on June 12 in Singapore. We were informed that the meeting was requested by North Korea, but that to us is totally irrelevant. l was very much looking forward to being there with you. Sadly, based on the tremendous anger and open hostility displayed in your most recent statement, I feel it is inappropriate, at this time, to have this long-planned meeting. Therefore, please let this letter serve to represent that the Singapore summit, for the good of both parties, but to the detriment of the world, will not take place. You talk about your nuclear capabilities, but ours are so massive and powerful that I pray to God they will never have to be used.

I felt a wonderful dialogue was building up between you and me, and ultimately, it is only that dialogue that matters. Some day, I look very much forward to meeting you. In the meantime, I want to thank you for the release of the hostages who are now home with their families. That was a beautiful gesture and was very much appreciated.

If you change your mind having to do with this most important summit, please do not hesitate to call me or write. The world, and North Korea in particular, has lost a great opportunity for lasting peace and great prosperity and wealth. This missed opportunity is a truly sad moment in history.

Donald J. Trump
President of the United States of America

North Korea first threatened to cancel the much-anticipated summit with the United States after it had cancelled high-level meetings with South Korea earlier this month, because South Korea and the U.S. conducted military exercises. North Korea views such military drills as practice for invasion of its country.

South Korea asked not to participate in the military drills, and the U.S. later cancelled a planned military exercise earlier this month with B-52 bombers and South Korean planes over South Korea’s worries that the exercise could jeopardize the upcoming U.S.-North Korea summit.

Trump has said the U.S. military is “ready if necessary” and “greatly enhanced,” should it need to be called into action against North Korea.

There’s a “substantial chance” the summit won’t happen in June, the President had said, and that it “could happen later.”

Last week, North Korea claimed it had dismantled and destroyed its only known nuclear testing site on Thursday, which was witnessed by international journalists, including Americans.

This all came just days after North Korea released three American detainees to Secretary of State Mike Pompeo on his second visit to the isolated regime in weeks, and after President Trump first announced that the highly anticipated summit with Kim Jong Un would be held in Singapore on June 12.

Watch the US Navy fire a Tomahawk land attack missile