In this handout photo provided by South Korea Presidential Blue House via Hankyoreh, North Korean leader Kim Jong Un, right, embraces Presdient of South Korea Moon Jae-in after their meeting at the northern side of the Panmunjom in North Korea on May 26, 2018. Kim and Moon have met for the second time in a month to discuss peace commitments they reached in their first summit and Kim's potential meeting with President Donald Trump. (South Korea Presidential Blue House/Hankyoreh Daily/Sipa USA/TNS)
May 27, 2018 Matt Stiles - Tribune Washington Bureau and Noah Bierman - Tribune News Service
Share
Tweet
Flip

SEOUL, South Korea — Prospects for a historic U.S.-North Korean summit appear be improving following a surprise meeting Saturday between the leaders of North and South Korea during which the two men discussed reviving the summit that President Donald Trump had called off.

The meeting between North Korea’s Kim Jong Un and South Korean President Moon Jae-in — announced by the South Korean president’s office a few hours after it occurred — marked another historic moment in the fraught history of the two nations. The leaders were apparently able to get together quickly to address a crisis in a way that until recently would have been almost unthinkable.

Saturday’s meeting was only the fourth time — but the second in a month — that top leaders from the North and South have met directly. 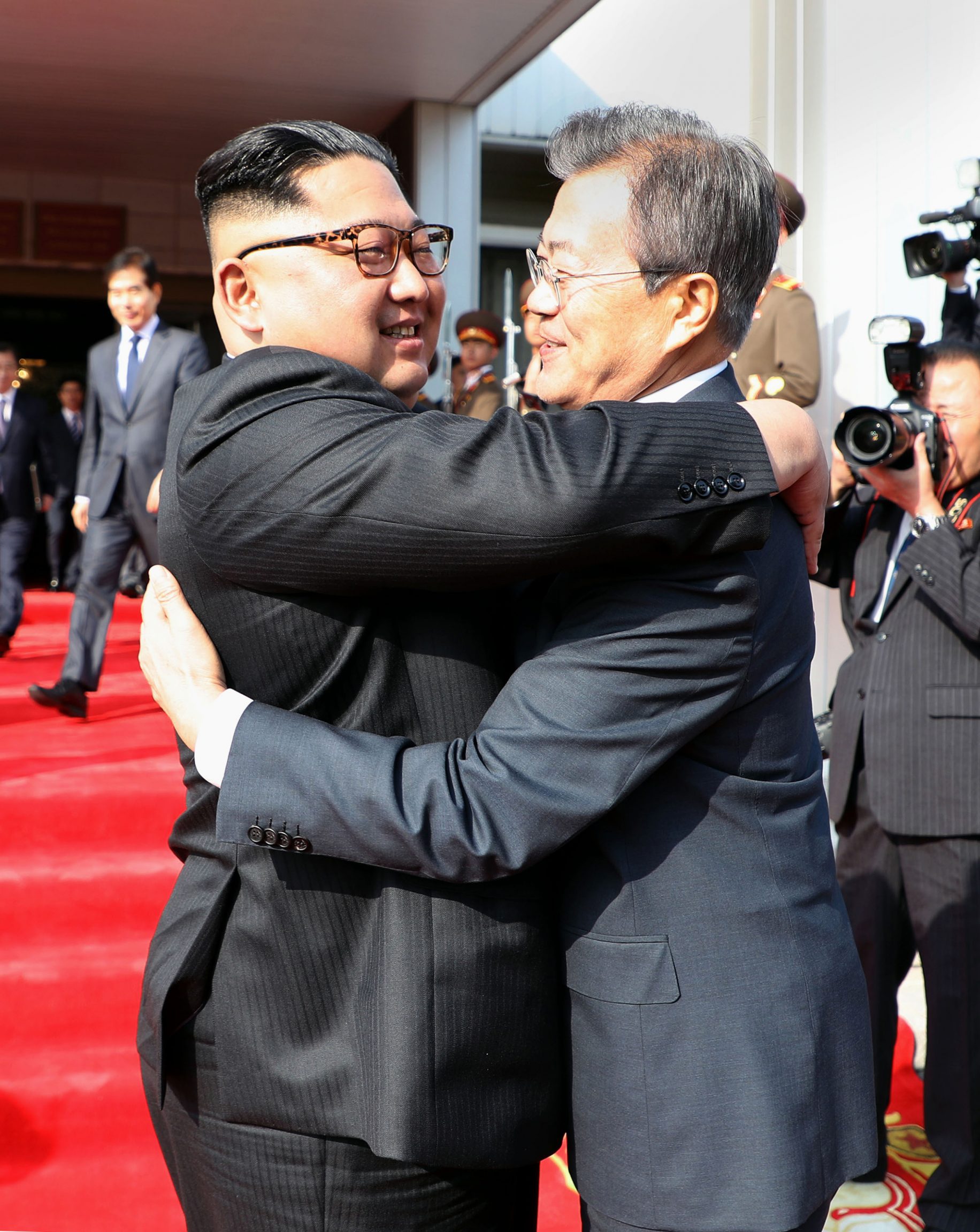 In this handout photo provided by South Korea Presidential Blue House via Hankyoreh, North Korean leader Kim Jong Un, right, embraces Presdient of South Korea Moon Jae-in after their meeting at the northern side of the Panmunjom in North Korea on May 26, 2018. Kim and Moon have met for the second time in a month to discuss peace commitments they reached in their first summit and Kim’s potential meeting with President Donald Trump. (South Korea Presidential Blue House/Hankyoreh Daily/Sipa USA/TNS)

The purpose, a spokesman for Moon said, was to continue inter-Korean dialogue, but also to salvage a potential meeting between Kim and Trump, who on Thursday canceled a scheduled summit in Singapore, citing a series of hostile words and signals from Kim’s regime.

“They exchanged opinions for implementation of the Panmunjom Declaration and for the successful realization of U.S.-North Korea summit,” the spokesman, Yoon Young-chan, said.

Moon said Sunday that he and Kim Jong Un agreed to meet “casually,” when needed, a dramatic shift in inter-Korean relations, regardless of the outcome of the Trump-Kim summit. He said Kim had requested the meeting.

“I have long emphasized the importance of regular, direct communication between leaders as a way of overcoming conflict between the two Koreas,” he said at a news conference in Seoul. “In that regard, I’d like to say yesterday’s summit, which was held like an everyday event between friends, is as much meaningful as the historic Panmunjom summit in April. I think this is how the two Koreas should meet.”

Moon said the two leaders had a “candid” conversation about the possible summit with Trump, and Moon appeared to stand firm with the United States’ position on denuclearization.

“I stressed that the two leaders need to settle misunderstandings through direct communication and have sufficient communication through working-level talks on the agenda to be agreed on at the summit,” Moon said, adding that Kim agreed.

“Chairman Kim once again made clear his will for the complete denuclearization of the Korean Peninsula,” he said, “and expressed his willingness to end the history of war and confrontation and cooperate for peace and prosperity through a successful summit with the United States.”

White House officials said they were informed of the extraordinary two-hour meeting in advance, and indicated they remained open to a summit between Trump and Kim.

Trump, during an appearance in the Oval Office on Saturday night, acted as if the summit had never been called off. He said, “We’re doing very well in terms of the summit with North Korea” and that “there’s a lot of good will.”

“A lot of people are working on it,” he added. “It’s moving along very nicely. We’re looking at June 12 in Singapore. That hasn’t changed.”

Independent analysts saw Saturday’s meeting between the North and South Korean leaders as another indication of Moon’s commitment to securing a diplomatic breakthrough on the Korean peninsula after 65 years of hostility between the two countries.

“Moon Jae-in’s priority is to convince Kim Jong Un to seize the opportunity, no matter what, which is the summit meeting with the U.S.” said Bong Young-shik, a research fellow at Yonsei University’s Institute for North Korean Studies in Seoul.

But Saturday’s meeting could pose risks if Moon strayed from Washington’s position, he added.

Moon, the son of North Korean war refugees who rose to power last year and has staked his presidency on the prospect of inter-Korean peace, might also be trying to secure his own commitments from the North — even if talks with Trump go nowhere.

Moon has been careful during the last few months of whirlwind diplomacy to frequently credit Trump for the opening of talks with North Korea. Nonetheless, strains between the allies have periodically become noticeable.

Trump notably did not inform the South Koreans before canceling the summit Thursday — White House officials said he feared word would leak to the news media if he informed allies. The White House released his letter to Kim scrubbing the summit shortly after Moon landed back in Seoul after a visit to Washington, where he had met with Trump.

A U.S. national security spokesman said Saturday that high-level White House officials were notified of Moon’s meeting in advance, though he would not say whether the White House requested it, helped script the dialogue or was given an option to call it off.

“We continue to value our close coordination with our South Korean ally on these issues,” said Robert Palladino, the national security spokesman.

One former national security official predicted Trump would react enthusiastically to Moon’s attempt to keep the diplomatic outreach between Trump and Kim alive.

“The president’s approach worked,” the former official said in a text message. Trump “scared them. Moon wants talks. We have regained initiative.”

By contrast, Srinivasan Sitaraman, an associate professor of political science at Clark University in Massachusetts, saw the sudden meeting between the two Korean leaders as a sign that South Korea was pursuing its own interests independently of the U.S.

He noted that to Moon, peace between the two Koreas “is very important to his political legacy and regional stability.”

“This second, impromptu summit tells us that the United States has become a superfluous and unreliable partner,” he said.

Michael J. Green, who served as senior Asia adviser to President George W. Bush during a previous effort to negotiate with North Korea, said Trump probably does welcome Moon’s efforts but that Moon has different aims than Trump.

“It is, first and foremost, Moon trying to resurrect the summit because he sees the alternative as Donald Trump talking about military strikes again, which really traumatized the South Korean people,” Green said.

Conventional warfare could cause tens of thousands of deaths in South Korea, while nuclear or chemical attacks would be even more devastating.

The chief sticking point for Washington and Pyongyang is Trump’s insistence that North Korea, which has amassed as many as 60 nuclear weapons and long-range missiles to deliver them, immediately begin steps toward total denuclearization.

North Korea has not been willing to commit to eliminating its nuclear arsenal, which Kim, his father and his grandfather, who each preceded him as leader, have spent more than half a century acquiring.

Moon is less concerned with denuclearizing North Korea — a goal that many outside analysts see as unlikely. Instead, Green explained, Moon wants to keep the dialogue alive.

“The South Koreans are reading the president,” he said.

They are also reading Kim, who may be just as eager to meet with Trump. Kim might see the diplomacy as key to relaxing the severe sanctions against his isolated country.

Trump helped build that pressure by securing cooperation from China and other major economic players. But if diplomacy is back in play — whether symbolic or substantive — China may be eager to reopen trade with North Korea, a longtime ally.

“North Koreans really, really want this meeting with Trump,” said Sue Mi Terry, a former CIA analyst who serves as Korea chair at the Center for Strategic and International Studies in Washington.

“Their reaction after Trump canceled was so conciliatory — in all my years of following North Korea, I’ve never seen anything like that,” she said. “I think there is a good chance the summit is back on track.”

After Trump said the summit was off, the North Korean government issued a statement saying it regretted Trump’s action and remained willing to talk. Trump called that “a very nice statement.”

Moon and Kim met at Tongilgak, a negotiation site on the North Korean side of Panmunjom, the diplomatic outpost on the border separating the two countries, which are still technically at war.

Moon was greeted there by Kim Yo Jong, the North Korean leader’s sister, who made a splash in South Korea by attending the Winter Olympics. A top North Korean diplomat and former spy chief for the totalitarian state, Kim Yong Chol, also attended the meeting.

The two leaders posed for pictures together, embracing.

Representatives for the Blue House, the South Korean president’s official residence, declined to comment on which nation initiated Saturday’s meeting.

The meeting followed a head-spinning series of diplomatic events. Thursday, in calling off the June 12 summit with Kim, Trump had accused the government in Pyongyang of “open hostility.”

On Friday, however, he said that talks with North Korean officials had resumed. He expressed cautious optimism that the meeting could be held after all.

Earlier Saturday, another spokesman for Moon, Kim Eui-kyeom, told reporters that Trump’s softening of his language had been welcomed by the Blue House:

“We consider it fortunate that the embers of dialogue between the U.S. and North Korea have not died and are now being revived,” he said. “We are carefully watching the developments.”

'This one will be different': Daytona's Hal Kushner to give Memorial Day address in D.C.