Following the weekend’s national “March For Our Lives” student-led demonstration calling for more gun control in the United States, the hashtag “Repeal The Second Amendment” is now nationally trending on Twitter, with at least 76,000 tweets about the topic, and growing.

In the wake of several mass shootings throughout the past year – including the Las Vegas massacre in the fall where 58 people were killed, and the more recent school shooting at Marjory Stoneman Douglas High School in Parkland, Florida, where a 19-year-old shot and killed 17 people – there has been national outcry for tougher gun control, particularly from the young people of Generation Z.

The Second Amendment has now seemingly come under siege, and some are calling for changes to the Bill of Rights – the first 10 amendments to the U.S. Constitution, ratified in 1791, which guarantee rights such as freedom of speech, assembly and worship – and, notably, the right to bear arms.

The demonstrations on Saturday followed actions by several major companies to limit their sales of firearms, with many companies now prohibiting the sale of guns to those under 21. Citigroup also just became the first Wall Street bank to take a stance in the gun control debate, by implementing new restrictions on the sale of firearms by its business customers. And the popular yet controversy-ridden video platform YouTube recently said it will enforce tougher restrictions on gun-related videos. The restrictions will begin in April and are said to initially target videos that promote the sale of firearms and accessories. President Donald Trump also recently announced there will be a ban on bump stocks, which is an attachment that enables a semiautomatic rifle to fire faster.

On Tuesday, the hashtag “Repeal The Second Amendment” was the No. 2 national trending topic on Twitter at one point. 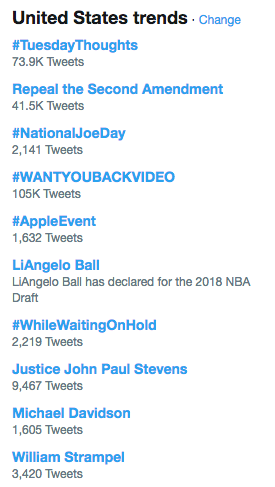 “Repeal the Second Amendment” was the No. 2 national trending topic on Twitter recently. (Screen Shot/Twitter)

Stevens was one of four dissenting justices who voted not to overturn the 2008 case of District of Columbia v. Heller, upholding citizens’ individual rights to bear arms.

“That decision — which I remain convinced was wrong and certainly was debatable — has provided the N.R.A. [National Rifle Association] with a propaganda weapon of immense power,” Stevens wrote. “Overturning that decision via a constitutional amendment to get rid of the Second Amendment would be simple and would do more to weaken the N.R.A.’s ability to stymie legislative debate and block constructive gun control legislation than any other available option.”

Stevens added: “That simple but dramatic action would move Saturday’s marchers closer to their objective than any other possible reform. It would eliminate the only legal rule that protects sellers of firearms in the United States — unlike every other market in the world. It would make our schoolchildren safer than they have been since 2008 and honor the memories of the many, indeed far too many, victims of recent gun violence.”