A Russian spy ship, the Viktor Leonov, was spotted just 30 miles off the coast of Virginia in international waters on Wednesday, military officials said, The Virginian-Pilot reported. The Russian ship was spotted approaching the east coast last week.

“We are tracking the Viktor Leonov’s presence off the East Coast, much like we are aware of all vessels approaching the United States and Canada,” said Navy Spokesman Lt. Cmdr. Brian Wierzbicki. “We respect the rights and freedoms of all nations to operate in international waters in accordance with international law.” 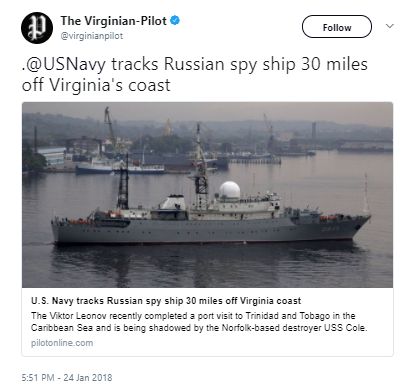 The Russian ship is being tracked by the Norfolk-based destroyer USS Cole as the ship makes its away along the U.S. east coast.

A P-8A Poseidon was launched from Naval Air Station Jacksonville and tracked the ship roughly 30 miles off the coast of Virginia, according to The Daily Star.

Just days ago, the Viktor Leonov was observed leaving the capital of Trinidad and Tobago.

Last year in February, the ship was spotted 30 miles off the eastern coast of the United States near a U.S. submarine base in Connecticut.

Groton, Connecticut, is the home of Naval Submarine Base New London, which the U.S. Navy describes as the “Home of the Submarine Force.”

The SSV-175 Viktor Leonov was “loitering” in international waters just 30 miles south of Groton, Connecticut. The ship, which is capable of intercepting communications, is also armed with surface-to-air missiles.

Around the same time last year, President Donald Trump mentioned the ship during a press conference.

“Hey, the greatest thing I could do is shoot that ship that’s 30 miles offshore right out of the water,” Trump said. “Everyone in this country is going to say, ‘Oh, it’s so great.’ That’s not great. That’s not great. I would love to be able to get along with Russia.”

The ship also operated near the U.S. in 2015, but Russian spy ships have previously operated in waters near Cuba, Cape Canaveral, Norfolk and the U.S. nuclear missile submarine base at Kings Bay, Georgia.