A Russian spy ship being monitored by the Pentagon is in the Caribbean Sea making its way up the U.S. coastline, The Free Beacon has reported. 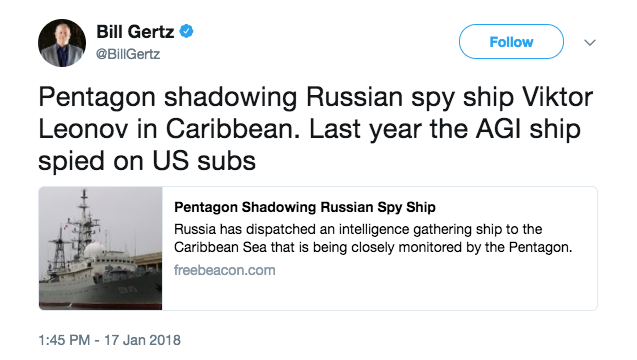 The ship left the Port of Spain in Trinidad and Tobago on Monday and appears to be conducting similar operations that it has done previously.

“What makes it noteworthy is the increase of Russian naval activity worldwide,” an official told The Free Beacon. “It makes us pay close attention, not to the tactics, but to how this fits into overall Russian naval behavior.”

Last year in February, the ship was spotted 30 miles off the eastern coast of the United States near a U.S. submarine base in Connecticut.

Groton is the home of Naval Submarine Base New London, which the U.S. Navy describes as the “Home of the Submarine Force.”

The SSV-175 Viktor Leonov was “loitering” in international waters just 30 miles south of Groton, Connecticut. The ship, which is capable of intercepting communications, is also armed with surface-to-air missiles.

Around the same time last year, President Donald Trump mentioned the ship during a press conference.

“Hey, the greatest thing I could do is shoot that ship that’s 30 miles offshore right out of the water,” Trump said. “Everyone in this country is going to say, ‘Oh, it’s so great.’ That’s not great. That’s not great. I would love to be able to get along with Russia.”

The ship also operated near the U.S. in 2015, but Russian spy ships have previously operated in waters near Cuba and the U.S. nuclear missile submarine base at Kings Bay, Georgia.