Chelsea Manning has filed to run for US Senate in Maryland

Chelsea Manning has filed to run for U.S. Senate in Maryland, according to Federal Election Commission (FEC) filings dated Jan. 11. Manning filed to run as a Democrat.

🚨 Per FEC filings, @xychelsea is running against Ben Cardin for Maryland Senate this year. https://t.co/MrQIs0Znzr pic.twitter.com/8Gw7vtVtc2

Manning, 30, is the transgender former U.S. Army intelligence analyst who leaked more than 700,000 classified documents to WikiLeaks in 2010, making it the largest leak in United States history. Manning was sentenced to 35 years in prison, but her sentence was commuted by former President Barack Obama. Manning was released from prison in May.

The age requirement to run for U.S. Senate is 30 years old. Manning would challenge Democrat Ben Cardin. Cardin’s seat is up for re-election in November; Cardin has served two terms in the U.S. Senate representing Maryland. 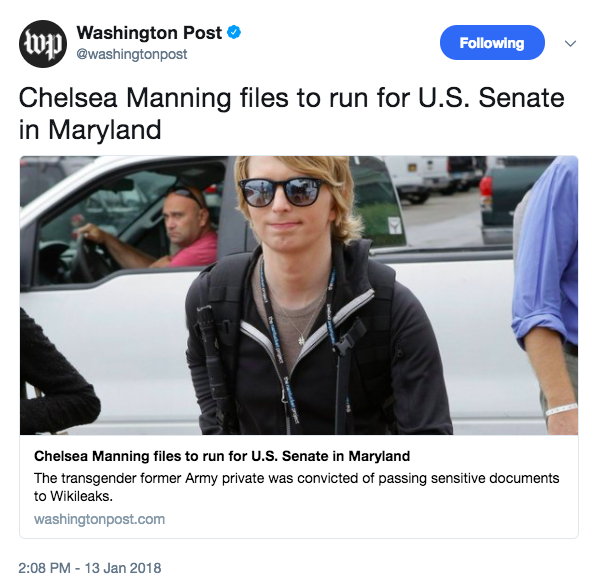 Chelsea Manning has reportedly filed to run for U.S. Senate in Maryland. (Twitter)

Manning leaked more than 700,000 government documents to WikiLeaks because she believed she had a responsibility to the public, she has said. Manning did not think releasing nearly three-quarters of a million documents would threaten national security.

Manning was released from prison early after serving seven years of a 35-year sentence – the longest prison term given to an American leaker. Obama commuted Manning’s sentence just days before he left office.

Manning, who entered an all-male military prison as “Bradley,” announced he was transgender immediately after his sentencing in 2013.

When the military denied Manning’s request for hormones, Manning tried to commit suicide twice. Manning will remain an unpaid active duty soldier who is eligible for health care and other benefits.

To many people, Manning is an American traitor who does not deserve the spotlight or a public platform, let alone recognition for anything.

“F**k the police,” Manning tweeted, adding various emojis, including a gun and a police car, as well as the hashtag “disarm the police.”

Vietnam vet from R.I. still fighting, for his health and fellow soldiers