“F**k the police,” Chelsea Manning tweeted, adding various emojis, including a gun and a police car, as well as the hashtag “disarm the police.” 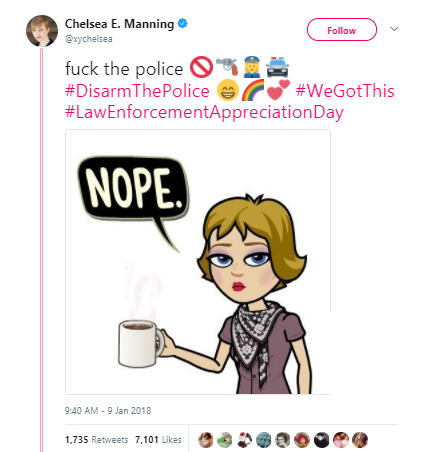 Twitter users responded – many saying Manning should get medical help, is seeking attention and should be sent back to prison.

In 2010, then U.S. Army intelligence analyst Bradley Manning leaked more than 700,000 classified documents to WikiLeaks, making it the largest leak in United States history. Manning was sentenced to 35 years in prison, but her sentence was commuted by former President Barack Obama. Manning was released from prison in May.

“[S]o, i guess canada has permanently banned me ?” Manning wrote on Twitter. “[D]enied entry b/c of convictions similar to ‘treason’ offense.”

According to the letter, Manning was “inadmissible on grounds of serious criminality for having been convicted of an offense outside Canada that, if committed in Canada, would constitute an [offense] under the Act of Parliament punishable by a maximum term of imprisonment of at least 10 years.”

Manning said she drove to the Canadian border in Lacolle, Quebec, on Thursday planning to go on vacation in Montreal and Vancouver. Manning said she was stopped and detained overnight before being given the report saying she was barred entry into Canada.

Trump: 'There is no Russian collusion, and this Democratic hoax is hurting our government'