Paronto this week told American Military News that Manning’s bid is “comical,” given Manning leaked hundreds of thousands of government documents – but wants to run for a public-entrusted position such as United States Senator.

“To me, it’s quite comical that someone who leaked intel can even be qualified to run for a federal office,” Paronto said. “What this shows or validates is that a political party, the DNC [Democratic National Committee], has no integrity because you are allowing someone like Manning to run for what should be a highly respected position.”

“Manning is a huge hypocrite that sold out military personnel on the ground and posts anti-law enforcement rhetoric,” Paronto continued. “But again, [Democrats] did nominate Hillary Clinton for President, so I’m not surprised Manning is running as a Democrat. The last thing the Senate needs is another hypocrite who will disrespect our nation and its laws.”

Manning, 30, is the transgender former U.S. Army intelligence analyst who leaked more than 700,000 classified documents to WikiLeaks in 2010, making it the largest leak in United States history. Manning was sentenced to 35 years in prison, but her sentence was commuted by former President Barack Obama. Manning was released from prison in May.

The age requirement to run for U.S. Senate is 30 years old. Manning would challenge Democrat Ben Cardin. Cardin’s seat is up for re-election in November; Cardin has served two terms in the U.S. Senate representing Maryland.

“The people of Maryland will get what they deserve, and I hope they will send a strong message that we are sick of people like Manning that want to sell out our country and be rewarded with a nice cushy salary as a Senator,” Paronto said.

“All I can say is that I’m glad I live in Nebraska,” Paronto added.

Paronto is one of the survivors and heroes of the 2012 terror attacks on the U.S. government facilities in Benghazi, Libya, where he was part of the CIA security team there. He fought off terrorists for more than 13 hours and saved more than 20 lives. His account of the attack is told in the book “13 Hours,” and he has also penned the book “The Ranger Way.” He is a former U.S. Army Ranger from the 2nd Battalion, 75th Ranger Regiment.

Paronto also recently called out Manning over a tweet where the former Army intelligence analyst wrote about caring for others.

“Whoa whoa whoa!!! You care?? Really? As your criminal ass sold out military personnel on the ground fighting the GWOT [Global War on Terrorism] endangering their lives AND telling the police to go f*ck themselves? Just stop hypocrite” Paronto responded. 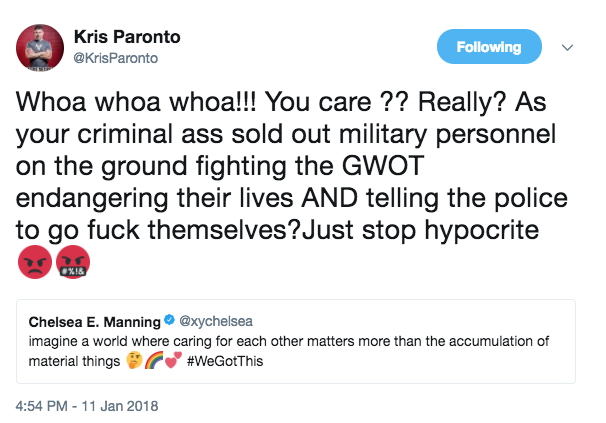 Manning has since tweeted and confirmed that she is running for Senate.

Manning leaked more than 700,000 government documents to WikiLeaks because she believed she had a responsibility to the public, she has said. Manning did not think releasing nearly three-quarters of a million documents would threaten national security.

Manning was released from prison early after serving seven years of a 35-year sentence – the longest prison term given to an American leaker. Obama commuted Manning’s sentence just days before he left office.

Manning, who entered an all-male military prison as “Bradley,” announced he was transgender immediately after his sentencing in 2013.

When the military denied Manning’s request for hormones, Manning tried to commit suicide twice. Manning will remain an unpaid active duty soldier who is eligible for health care and other benefits.

To many people, Manning is an American traitor who does not deserve the spotlight or a public platform, let alone recognition for anything.

“F**k the police,” Manning tweeted, adding various emojis, including a gun and a police car, as well as the hashtag “disarm the police.”

Here is Chelsea Manning's first video ad for US Senate