Mattis is there to visit American troops at the base but will not visit the detention center, which is also home to 41 prisoners.

Rumsfeld visited Guantanamo shortly after the terrorist attacks of 9/11, as that was when the military prison was established, to hold suspected terrorists.

President Donald Trump has not announced any plans for the detention center or the release of any prisoners there. 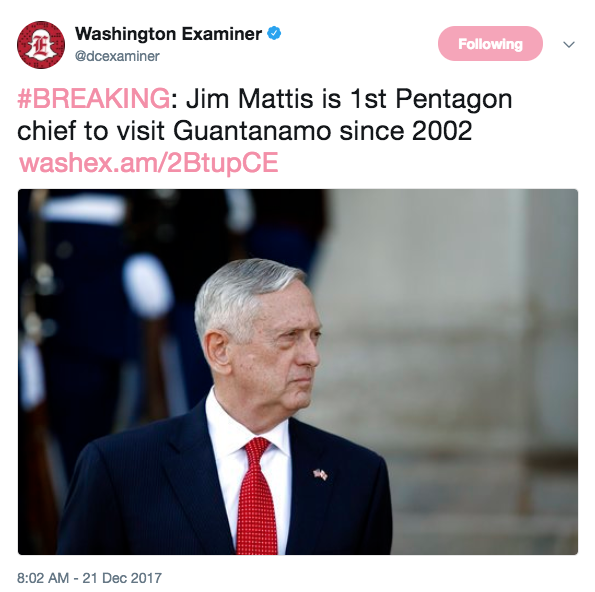 Trump recently said he would consider sending the suspected terrorist who killed eight and injured roughly a dozen others in New York City in November to the military prison.

“Send him to Gitmo. I would certainly consider that, yes,” Trump had said to reporters ahead of a Cabinet meeting at the White House.

And, in July, the topic of Guantanamo Bay also surfaced in the news, as it was learned that the man who was once Guantanamo Bay’s youngest inmate and was convicted of killing a U.S. soldier in Afghanistan is reportedly receiving a $10.5 million Canadian ($8 million U.S.) check from the Canadian government and an apology.

Canadian-born Omar Khadr pleaded guilty in 2010 to killing U.S. Army Sgt. First Class Christopher Speer, a Special Forces medic, in 2002, and he was sentenced to eight years at Guantanamo Bay in Cuba, plus time he had already spent in custody, which was about eight years. The Canadian government later discovered that Khadr might have pleaded guilty under duress.

Khadr was only 15 years old at the time of the incident. It was suspected he threw the grenade that killed Speer and injured Sgt. Layne Morris.

Khadr spent 10 years in Guananamo Bay. He had been captured by U.S. troops following a firefight at a suspected Al-Qaeda compound in Afghanistan.

Khadr went back to Canada and was serving the remainder of his sentence in an Alberta prison until he was released in May 2015, when he appealed his guilty plea.