Canada will pay out $10.5 million to ex-Gitmo inmate who killed a US soldier in Afghanistan

The man who was once Guantanamo Bay’s youngest inmate and was convicted of killing a U.S. soldier in Afghanistan is reportedly going to receive a $10.5 million Canadian ($8 million U.S.) check from the Canadian government and an apology. 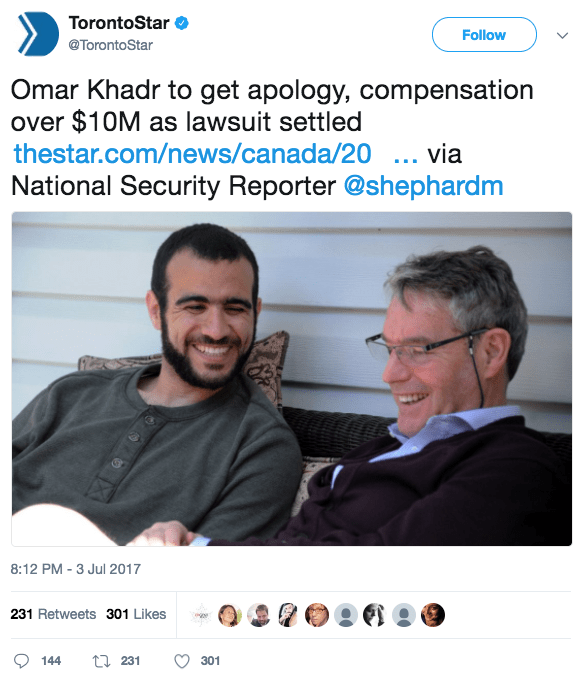 Canadian-born Omar Khadr pleaded guilty in 2010 to killing U.S. Army Sgt. First Class Christopher Speer, a Special Forces medic, in 2002, and he was sentenced to eight years at Guantanamo Bay in Cuba, plus time he had already spent in custody, which was about eight years.

Khadr was only 15 years old at the time of the incident. It was suspected he threw the grenade that killed Speer and injured Sgt. Layne Morris.

Lawyers for Khadr reportedly filed a $20 million (Canadian dollars) wrongful imprisonment lawsuit against the Canadian government because the government “violated international law by not protecting its own citizen and conspired with the U.S. in its abuse of Khadr,” according to a report in the Washington Post, and a deal was apparently made last month.

However, the lawyer for Speer’s widow said Tuesday they have filed an application “so that any money paid by the Canadian government to a former Guantanamo Bay prisoner convicted of killing him will go toward the widow and another U.S. soldier injured,” according to the Post.

Khadr spent 10 years in Guananamo Bay. He had been captured by U.S. troops following a firefight at a suspected Al-Qaeda compound in Afghanistan.

Khadr went back to Canada and was serving the remainder of his sentence in an Alberta prison until he was released in May 2015, when he appealed his guilty plea.

The Canadian government later discovered that Khadr might have pleaded guilty under duress.

“The Supreme Court of Canada ruled in 2010 that Canadian intelligence officials obtained evidence from Khadr under ‘oppressive circumstances,’ such as sleep deprivation, during interrogations at Guantanamo Bay in 2003, and then shared that evidence with U.S officials.,” according to the Post.

When he was released, Khadr apologized to the victims’ families. He reportedly rejects violent jihad, according to a report.