With the growing threat of conflict in cold-weather climates such as Russia and North Korea, the U.S. Marine Corps is investing in new ski technology according to Military.com. The Marine Corps is focusing on improving the training of their troops in cold and snowy environments as they have recently been more acclimated to fighting in the desert. 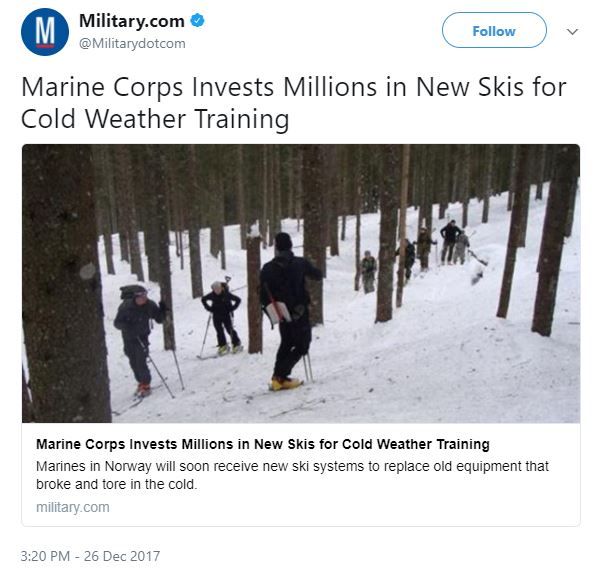 This announcement comes after U.S. Marine Corps Commandant Gen. Robert Neller’s recent visit to the Vaernes military base in Norway where he spoke to a group of 300 Marines and informed them to be prepared for a ‘big-ass fight’ with Russia that may be on the horizon.

Neller also informed the troops that, ‘I talked to the Norwegian colonel. I told him, no Marine is going to leave here unless they know how to ski.’

Currently, the ski equipment that members of the Marine Crops are supposed to use are not in the best condition. Earlier in the year, Military.com reported that troops from the Bravo Company, 1st Battalion, 2nd Marines could not keep their boots attached to their skis. It was reported that issues with the old equipment included ‘inflexible zippers, seams that separated and tore, pack frames that snapped, and boots that pulled loose from ski fastenings over and over.’

Staff Sgt. Nelson Acevedo described the condition of the existing ski equipment to Military.com in more detail adding, ‘I wouldn’t give anybody that ski setup that we had. When you’re putting your boots into the bindings, because the bindings are metal and the boots are old rubber, they rip a lot. So now you’re potentially causing injuries to the individual from the cold now being able to seep through.’

The Marine Corps has set aside a large budget for the upgraded ski equipment. They plan on buying 2,648 ski sets by the end of 2018, which comes at a cost of $7 million. Reconnaissance Marines, scout snipers, and one infantry company in every battalion will receive the NATO ski system.

The ski equipment upgrades will come in time for the Marine Corps’ upcoming cold-weather training exercise, which will be taking place above the Arctic circle.