U.S. Marine Corps Commandant Gen. Robert Neller warned his troops to be prepared for a ‘big-ass fight’ that may be on the horizon. He made these remarks while visiting US troops stationed in Norway at the Vaernes military base, first reported by Fox News.

A group of 300 U.S. marines were deployed to Norway back in January for a six-month mission. The deployment is significant because it’s the first time since World War II that U.S. troops have been stationed in Norway. Tensions in the region between NATO and Russia spurred the decision to send the troops. Marines were also deployed to Poland and Lithuania back in January for the same purpose. 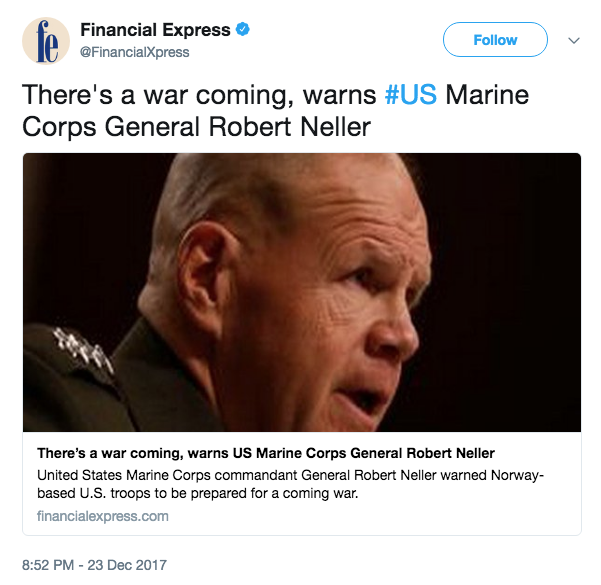 During his visit, Neller stressed to the Marines that ‘You’re in a fight here, an informational fight, a political fight, by your presence.’

While stationed in Norway, the Marines have worked with their European allies to strengthen their relationship. Norway shares a 120-mile border with Russia and NATO’s involvement with the Marines in the region has caused some concern for the Kremlin.

The original plan was to keep the Marines in Norway for one year, but it was recently announced that the troops will remain stationed there until the end of 2018. Troops will be cycled through in six-month intervals with the first group of Marines already completing their deployment last August.

‘Just remember why you’re here,” General Neller told the Marines. ‘They’re watching. Just like you watch them, they watch you. We’ve got 300 Marines up here; we could go from 300 to 3,000 overnight. We could raise the bar.’

This turmoil comes at a time when President Donald Trump has advocated for friendlier relations with Russia. The Marines have insisted that they were not deployed to Norway due to Russia and it has been reported that the troops have been instructed to not use the word ‘Russia’ in interviews with the media.

According to the National Security Strategy that was released this month from the White House, ‘China and Russia challenge American power, influence, and interests, attempting to erode American security and prosperity. They are determined to make economies less free and less fair, to grow their militaries, and to control information and data to repress their societies and expand their influence.’

Since it was originally announced over a year ago, Russia has questioned the deployment of U.S Marines to Norway.

‘Taking into account multiple statements of Norwegian officials about the absence of threat from Russia to Norway we would like to understand for what purposes is Norway so … willing to increase its military potential, in particular through stationing of American forces in Vaernes?’ the Russian Embassy told Reuters at the time.

Russia claims that US trained ex-ISIS fighters in Syria