A Democratic candidate for governor of Ohio, Bill O’Neill, took to Facebook on Friday afternoon to post about his sexual history. O’Neill is also a sitting Ohio Supreme Court justice.

This comes in the wake of allegations against Sen. Al Franken by a model and broadcaster who says Franken forcibly kissed her and also groped her without her consent while she was on a USO tour to entertain troops in late 2006.

“Now that the dogs of war are calling for the head of Senator Al Franken, I believe it is time to speak up on behalf of all heterosexual males,” O’Neill wrote on Friday. “As a candidate for Governor, let me save my opponents some research time. In the last fifty years, I was sexually intimate with approximately 50 very attractive females.” 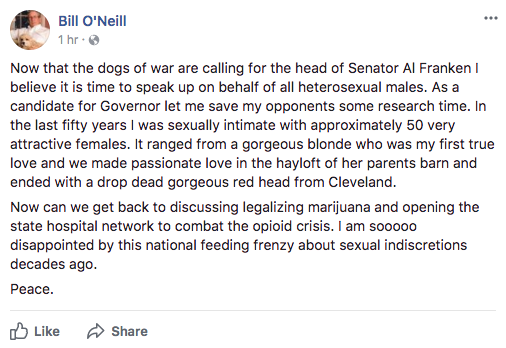 “It ranged from a gorgeous blonde who was my first true love and we made passionate love in the hayloft of her parents’ barn, and ended with a drop-dead gorgeous red head from Cleveland,” he continued.

“Now we can get back to discussing legalizing marijuana and opening the state hospital network to combat the opioid crisis. I am sooooo disappointed by this national feeding frenzy about sexual indiscretions decades ago. Peace,” he added.

O’Neill wrote the post, he confirmed to Cleveland.com, and he supports both Franken and Alabama Supreme Court Justice Roy Moore, who is facing multiple allegations of sexual harassment and has frequently been in the news as of late.

“Roy Moore apparently seems to be a challenged individual when it comes to morality,” O’Neill told Cleveland.com. “I think that’s very, very clear. He’s been convicted of nothing and he’s never had the opportunity to defend himself and that violates due process in America. The media is about to determine the election of a United States Senate campaign.”

O’Neill pointed out that he wasn’t sure if saying 50 women was accurate, as he “doesn’t keep count,” he told Cleveland.com, adding that he didn’t think it was “improper for a Supreme Court justice to comment on his sex life.” 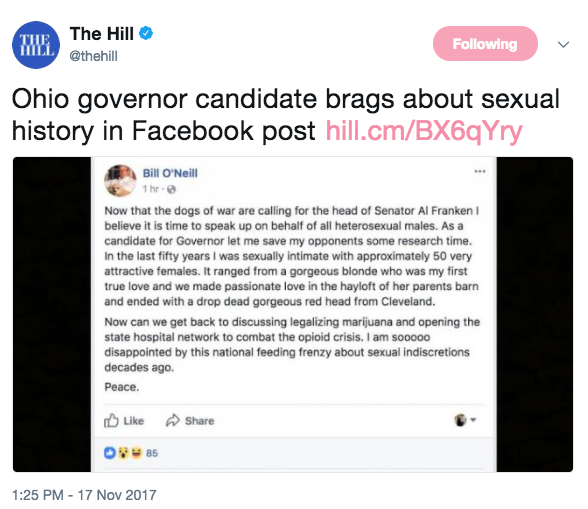