Army veteran was groped by Sen. Al Franken during USO tour, she says

A U.S. Army veteran has accused Sen. Al Franken of sexual misconduct, saying he groped her during a USO tour in 2003 while she was deployed in Kuwait.

Army veteran Stephanie Kemplin, now 41, said Franken cupped her breast during a photo op, CNN reported. She was 27 at the time and a military police officer in the Army.

“When he put his arm around me, he groped my right breast. He kept his hand all the way over my breast,” Kemplin told CNN in an interview. “I’ve never had a man put their arm around me and then cup my breast. So he was holding my breast on the side.”

Kemplin said she remembered being “embarrassed” when the incident occurred.

“It was long enough that he should have known if it was an accident. I’m very confident saying that,” she added, saying he kept his hand there for five to ten seconds before she moved so that his hand was off of her breast during the picture.

Kemplin is the fifth woman in the past several weeks to accuse Franken of sexual misconduct.

Earlier this month, radio host and model Leeann Tweeden claimed that Franken kissed her and groped her while on a USO tour. Franken at that time claimed he didn’t remember the incident but “sincerely apologized” to Tweeden. 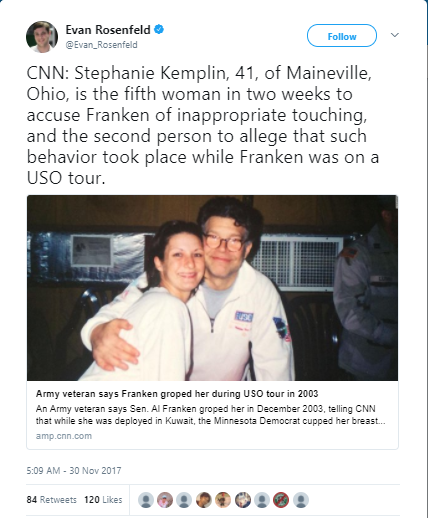 Kemplin’s sister, Amy Muddiman, and a former boyfriend told CNN that Kemplin previously told them about Franken inappropriately touching her.

“I just remember her telling me that he grabbed her breast and that she was so shocked about it,” Muddiman told CNN. “My sister is pretty bold and assertive, and she said that she didn’t know what to do.”

A spokesman for Franken told CNN: “As Sen. Franken made clear this week, he takes thousands of photos and has met tens of thousands of people and he has never intentionally engaged in this kind of conduct. He remains fully committed to cooperating with the ethics investigation.”