North Korea has again threatened to bomb the U.S. territory of Guam in the Pacific, this in light of what Pyongyang refers to as “reckless moves” by the U.S.

The last threat to Guam came in August on the heels of President Donald Trump saying North Korea would be “met with fire and fury like the world has never seen” if it continues to threaten the U.S. 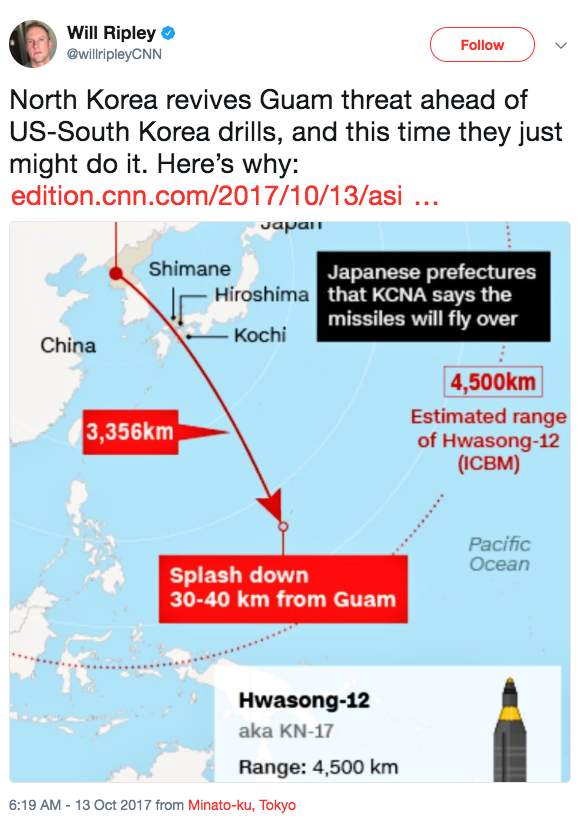 North Korea on Friday responded to the latest presence of American and allied aircraft over the Korean Peninsula. The U.S. on Tuesday sent bombers over both coasts of South Korea to conduct mock military drills. The show of force during tense times comes despite North Korea threatening to shoot down U.S. bombers if it has to, after the country led by dictator Kim Jong Un claimed the U.S. declared war when President Trump tweeted that North Korea “won’t be around much longer” if it keeps threatening the United States.

“We have already warned several times that we will take counteractions for self-defense, including a salvo of missiles into waters near the U.S. territory of Guam,” said Kim Kwang Hak, a researcher at the Institute for American Studies of the North Korean Foreign Ministry, according to the Korean Central News Agency (KCNA), CNN reported Friday. “The U.S. military action hardens our determination that the U.S. should be tamed with fire and lets us take our hand closer to the ‘trigger’ for taking the toughest countermeasure.” 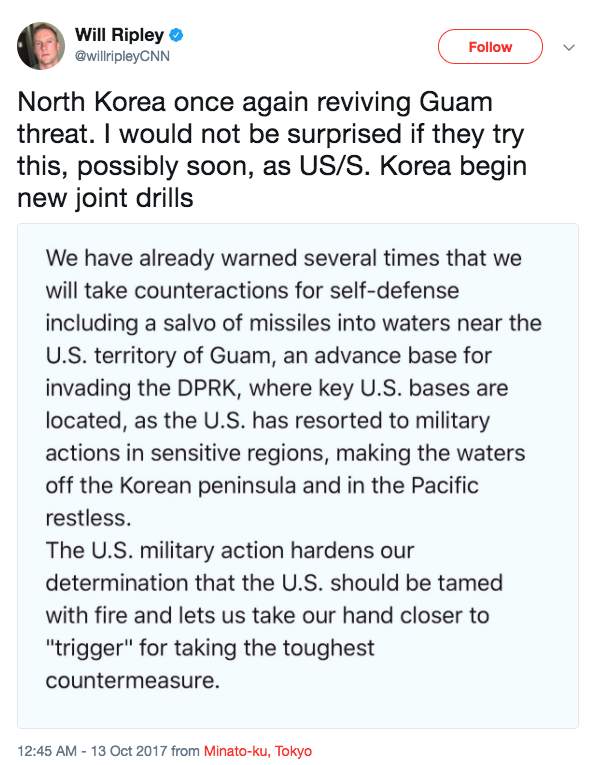 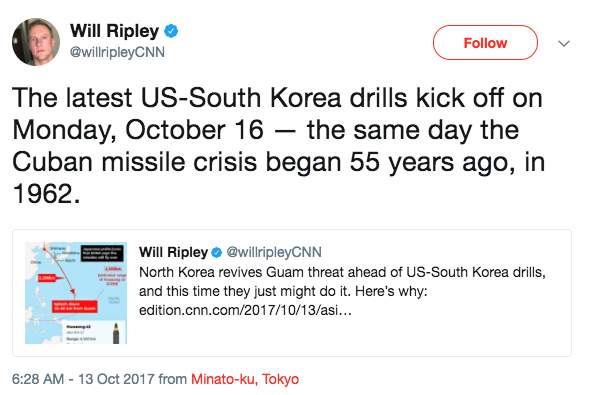 “[… The] U.S. would be solely responsible for ‘pushing the situation on the peninsula to the point of explosion,'” CNN reported.

It is no secret that emotions run high on both the U.S. and North Korean sides of this situation. President Trump and North Korean dictator Kim Jong Un have exchanged fierce comments back and forth for several weeks now.

The U.S. had sent bombers in late September – the aircraft flew the farthest north of the Demilitarized Zone (DMZ) any U.S. bomber or fighter aircraft has been in the 21st Century.

It was reported in early October that President Trump is mulling a trip to the DMZ when he travels to South Korea next month.

The President also recently shut down Secretary of State Rex Tillerson’s statements that the U.S. has an open line of communication with Pyongyang, and would hope to solve the conflict diplomatically. Trump alluded to the fact that his Administration and, most likely, the U.S. Military would be taking care of the situation on the Korean Peninsula.

Rhetoric has gone back and forth between the U.S. and North Korea all summer. Tensions can be cut with a knife, and the sometimes bizarre exchanges have left many Americans wondering exactly what is going to take place next.