The U.S. military on Saturday sent Air Force B-1B Lancer bombers and F-15C Eagle fighter jets to fly over waters east of North Korea in a show-of-force against the country. 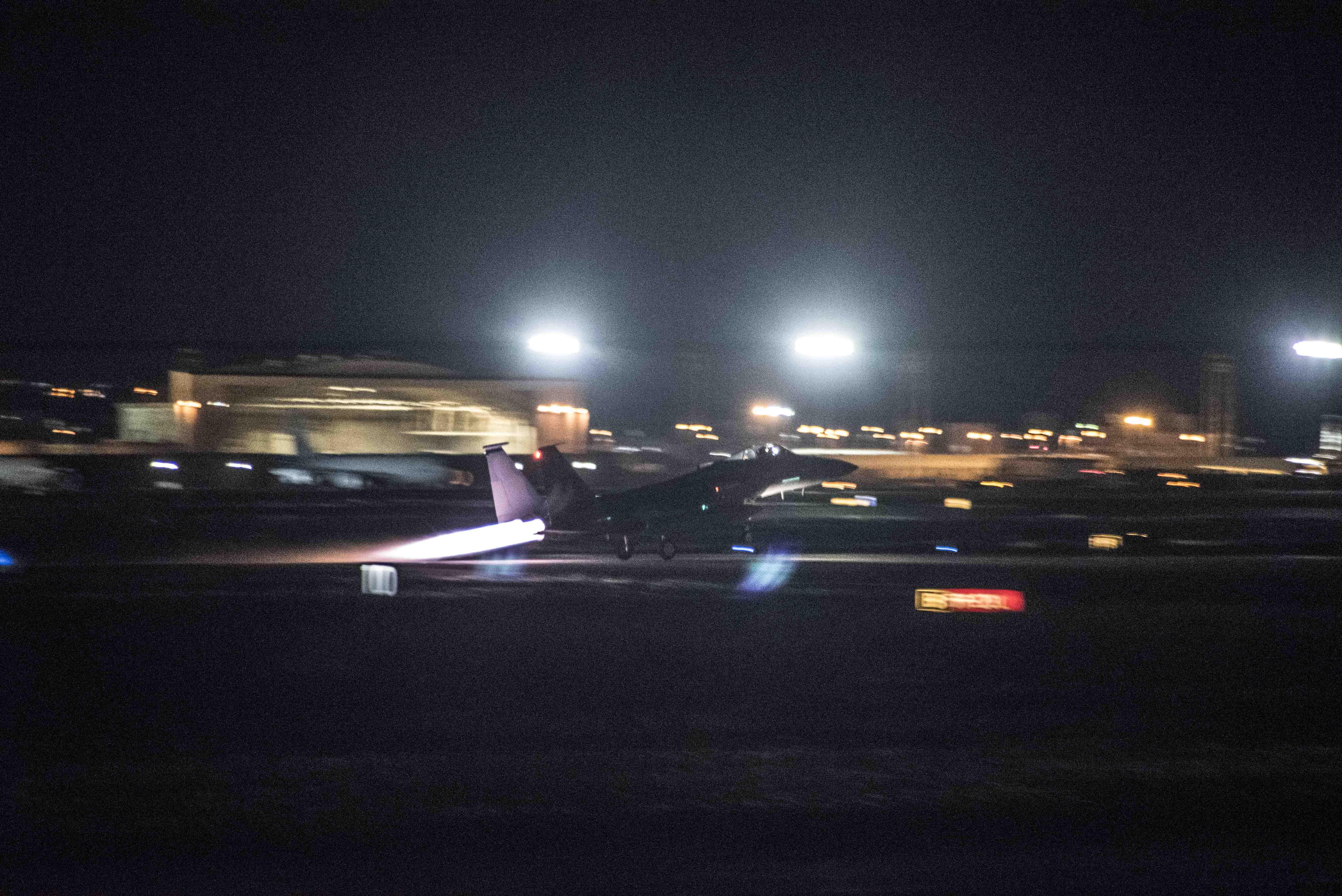 A U.S. Air Force F-15C Eagle takes off from the Kadena runway Sept. 23, 2017, at Kadena Air Base, Japan. Kadena-based F-15s escorted U.S. Air Force B-1B Lancer bombers executing a mission east of North Korea, flown to demonstrate the ironclad U.S. commitment to the defense of its homeland and in support of its partners and allies. (Photo by Senior Airman Quay Drawdy)

Notably, this is the farthest north of the Demilitarized Zone (DMZ) any U.S. bomber or fighter aircraft has flown off North Korea’s coast in the 21st Century, Pentagon Spokesperson Dana White said in a statement.

North Korea on Friday threatened to test a Hydrogen bomb, or H-bomb, over the Pacific Ocean in response to President Donald Trump’s speech at the United Nations earlier this week.

The Saturday mission was intended to send a “clear message” that the U.S. has plenty of military options in order to defeat any threat, and “underscores the seriousness with which the United States takes North Korea’s ‘reckless behavior,'” White said. 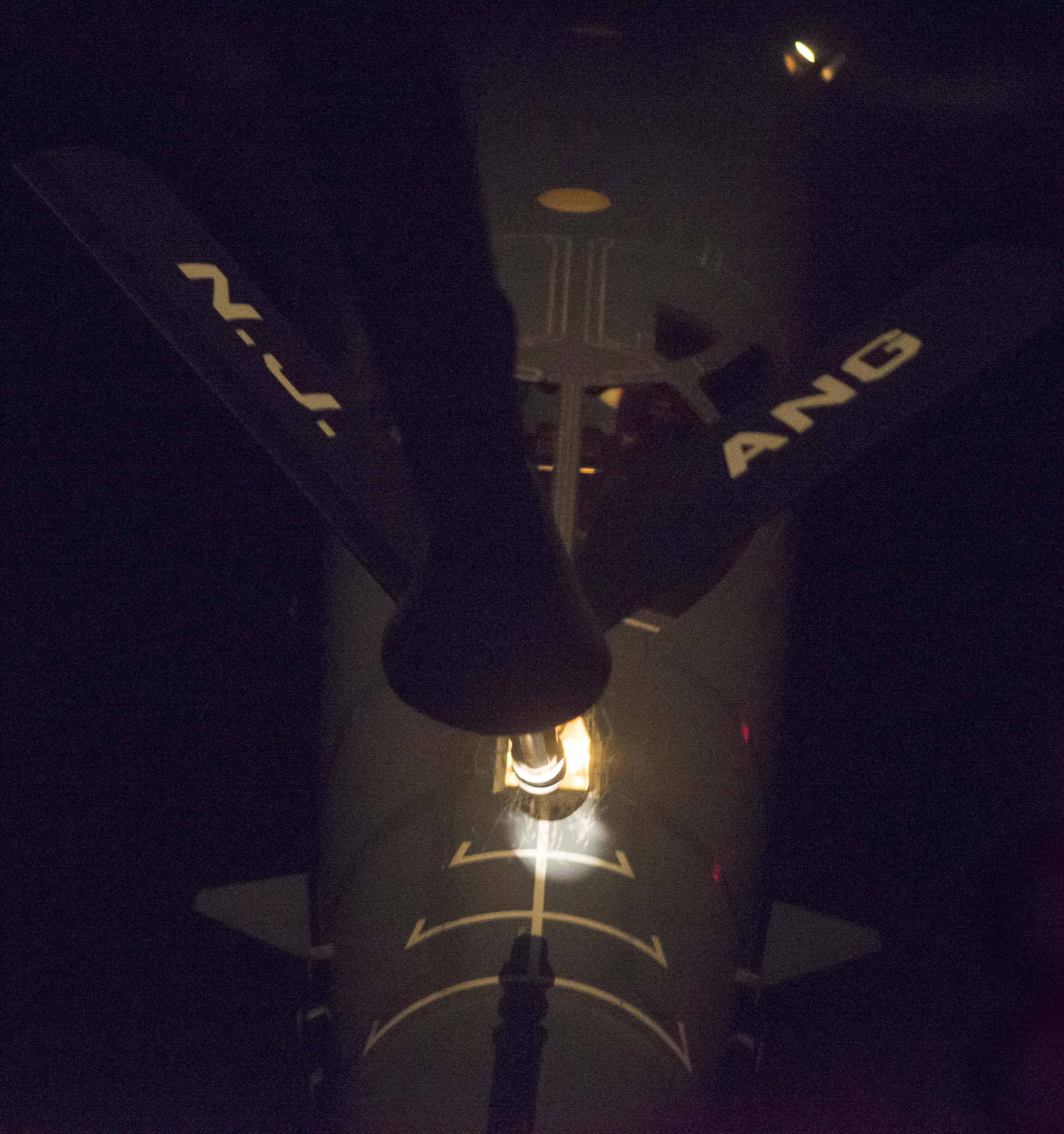 A U.S. Air Force B-1B Lancer, assigned to the 37th Expeditionary Bomb Squadron, deployed from Ellsworth Air Force Base, South Dakota, receives fuel from a U.S. Air Force KC-135 Stratotanker Sep. 23, 2017. This mission was flown as part of the continuing demonstration of the ironclad U.S. commitment to the defense of its homeland and in support of its allies and partners. (Photo by Airman 1st Class Christopher Quail)

“This mission is a demonstration of U.S. resolve and a clear message that the President has many military options to defeat any threat,” she said. “North Korea’s weapons program is a grave threat to the Asia-Pacific region and the entire international community. We are prepared to use the full range of military capabilities to defend the U.S. homeland and our allies.”

A U.S. Air Force B-1B Lancer, assigned to the 37th Expeditionary Bomb Squadron, deployed from Ellsworth Air Force Base, South Dakota, receives fuel from a U.S. Air Force KC-135 Stratotanker Sep. 23, 2017. This mission was flown as part of the continuing demonstration of the ironclad U.S. commitment to the defense of its homeland and in support of its allies and partners. (Photo by Tech. Sgt. Richard P. Ebensberger)

The B-1B bombers flew from Guam, while the F-15C fighter jets flew from Okinawa, Japan.

Earlier in September, U.S., Japanese and South Korean forces flew several fighter jets over the Korean Peninsula and dropped live weapons at the training range there, in a show of force in response to North Korea’s most recent intermediate-range ballistic missile launch on Sept. 14.

This was only the third North Korean missile to fly over Japan since 1998.

The North Korean launch came hours after North Korea threatened to blow the United States to “ashes and darkness” and has said it will “sink” the country of Japan, following a United Nations resolution that banned 90 percent of its exports.

North Korea threatening to test an H-bomb on Friday came after a slew of accusations from North Korean dictator Jim Kong Un on Thursday, in response to President Trump’s intense U.N. General Assembly speech on Tuesday, during which the President said “Rocket Man” Kim Jong Un is on a “suicide mission” and that the U.S. would “totally destroy” North Korea if need be.

On Thursday – the same day that Trump signed new sanctions against North Korea – Kim Jong Un threatened President Trump that he would “pay dearly” for his threat to destroy North Korea if the U.S. had to defend itself States or its allies, and he also called Trump a “dotard.”

In a rare appearance on camera, Kim spoke directly and said that Trump was “unfit to hold the prerogative of supreme command of a country.”

Kim also said that Trump is “a rogue and a gangster fond of playing with fire,” and that his U.N. speech showed “mentally deranged behavior.”

“[Trump] made the most ferocious declaration of a war in history,” Kim said. “I will make the man holding the prerogative of the supreme command in the U.S. pay dearly for his speech calling for totally destroying North Korea. Whatever Trump might have expected, he will face results beyond his expectation.”

On Wednesday, North Korean Foreign Minister Ri Yong-ho had said the President’s speech and threats were “the sound of a dog barking.”

Japanese Defense Minister Itsunori Onodera said Thursday: “We cannot deny the possibility it [an H-bomb or missile] may fly over our country said the country must ready itself for the sudden escalation in tensions and be prepared for a missile launch,” CNN reported.

The new sanctions aim to impact the flow of cash to North Korea and cut off trade partners, as well. The sanctions could also have contributed to the intensity of Kim Jon Un’s most recent statement, as sanctions further and further alienate North Korea.

The previous sanctions agains North Korea banned about 90 percent of North Korea’s exports, fully banning the country’s textile exports and reducing its oil and petroleum exports. The sanctions also banned the country’s overseas laborers, which provided nearly $500 million in revenue; and cut off all foreign investment with North Korea, its assets being frozen. They were passed unanimously by the U.N. Security Council – with both China and Russia voting in favor – following North Korea’s sixth ever successful nuclear missile launch and claims that the country now has a Hydrogen bomb it can place on an intercontinental ballistic missile (ICBM).

Secretary of State Rex Tillerson said this week that the sanctions are already working, and that North Korea is already starting to suffer from the fuel shortages.

President Trump said Tuesday at the U.N. that it is time for North Korea to realize that ceasing its missile program is the “only acceptable future,” but that the United States is ready to “totally destroy” the country if it continues on this path of destruction toward the U.S. or its allies.