A former Navy SEAL testified in the sentencing hearing for Army Sgt. Bowe Bergdahl, who faces charges of desertion and endangering fellow soldiers, and misbehavior before the enemy. Bergdahl could face a life sentence.

James Hatch helped lead the search in the days following Bergdahl’s desertion, and he testified Wednesday that he knew Americans would be killed or hurt in the search for the Army Sergeant when he found out the mission. 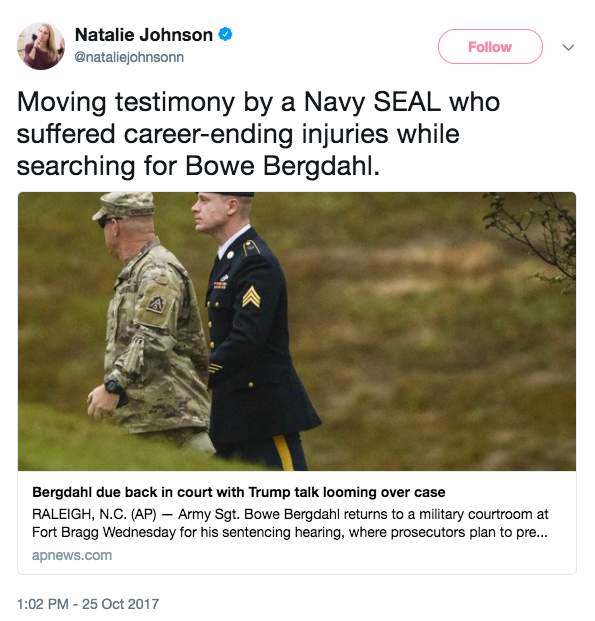 “‘Everyone on that mission was aware that he walked off’ his post,” Hatch said during a sentencing hearing, USA TODAY reported.

When asked why he went looking for Bergdahl, Hatch said: “He’s an American. […] It’s really something I never questioned,” USA TODAY reported.

Hatch was shot in the leg during the mission to find Bergdahl after he left his outpost in Afghanistan in 2009. Six people died searching for Bergdahl.

Bergdahl could face a life sentence for the misbehavior charge, and up to five years for the desertion charge.

“Everyone in Afghanistan was looking for Bergdahl,” said Capt. John Billings, who was Bergdahl’s platoon leader when he walked off the post.

Billings said his platoon spent weeks searching for Bergdahl in austere conditions with little food or water and his soldiers would go without showers for up to two weeks at a time.

Hatch offered a harrowing account of an attempted rescue mission. He led a team of special operations forces based in Jalalabad, Afghanistan. Their mission was to capture or kill “high value targets” or rescue hostages.

When told they were to rescue a missing American, that became the team’s top priority.

The team came under immediate fire as they were descending toward a place where they were told Bergdahl might be held. It was not clear whether he was there, but the area was filled with militants and civilians.

Helicopters carrying the SEALs came under fire as they began descending toward the spot. Hatch said he saw tracer fire streaming toward the helicopters.

He became emotional when he talked about a service dog, Remko, who was shot in the head and killed by a militant.

Hatch was shot in the leg above the knee. “I was laying there trying not to scream, but screaming,” Hatch said.

Hatch, who had a noticeable limp as he approached the witness stand, said he underwent 18 procedures over several years. He was accompanied by a service dog.

Billings, the platoon leader, said he initially thought he was the victim of a bad joke when his soldiers first told him Bergdahl was missing. His platoon sergeant told him it was no joke, and he sent a message notifying his higher headquarters of a missing soldier.

The next 10 days were a “big blur,” Billings said.

His sentencing was originally slated for Monday but was delayed after the defense filed a last-minute motion over comments President Donald Trump has made in the past as a candidate, and last week as President, claiming Bergdahl would not receive a fair sentencing.

Col. Jeffrey Nance, the military court judge at Fort Bragg, North Carolina, said he wanted more time to review the defense’s motion, and had recessed the court until Wednesday.

A guilty plea meant Bergdahl would not face a trial. He had already decided to let a judge – and not a military jury – render a verdict.

During the 2016 presidential campaign, Donald Trump said Bergdahl was “a dirty rotten traitor” for leaving his post and endangering the lives of others, and that he should “face the death penalty.” Six soldiers died while looking for Bergdahl.

A military judge in February ruled against dropping charges against Bergdahl after Bergdahl’s lawyers argued that comments made by Trump prior to the 2016 election violated their client’s due process rights.