Despite reports in June that the U.S. could send an additional 4,000 troops to Afghanistan, President Donald Trump is reportedly considering doing the exact opposite, and removing all troops from the country.

The Wall Street Journal recently reported that “current and former Trump Administration officials” said the option is being considered. 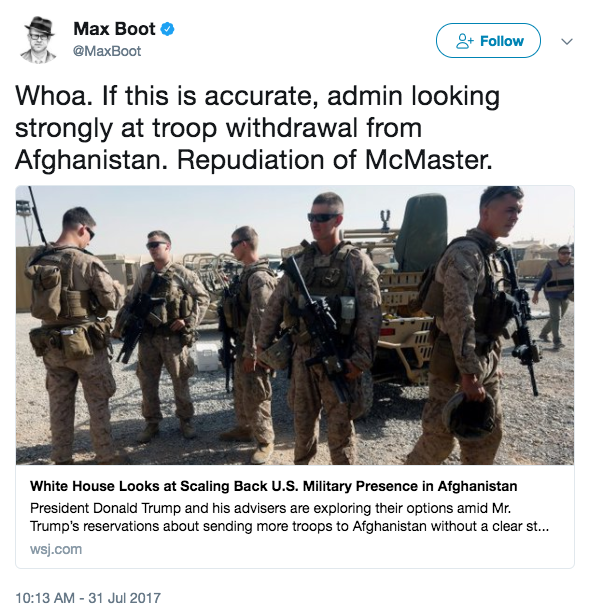 “It’s a macro question as to whether the U.S., this administration, and this president are committed to staying,” one senior administration official told the Wall Street Journal. “It doesn’t work unless we are there for a long time, and if we don’t have the appetite to be there a long time, we should just leave. It’s an unanswered question.”

Trump reportedly doesn’t want to be constricted by deadlines and specific numbers in the fight against the Taliban in Afghanistan, which has been ongoing for 16 years.

Instead, the administration might reportedly reduce the number of troops there and rely more on U.S. special forces and drones.

“It is becoming clearer and clearer to people that those are the options: go forward with something like the strategy we have developed, or withdraw,” the senior administration official said, referring to a modest withdrawal plan, according to the Wall Street Journal.

However: “At best, that is a very low minority view,” one senior U.S. military official said, of withdrawing U.S. troops, according to the Wall Street Journal. “It’s flawed because it doesn’t address the primary concerns of getting to a point where Afghanistan is able to secure itself.” 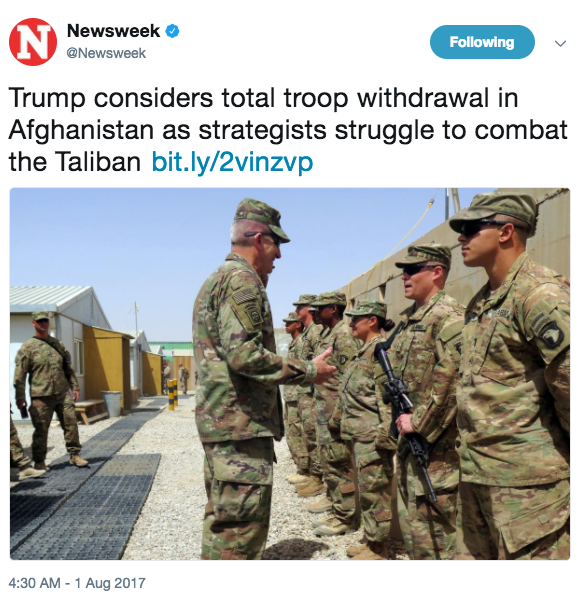 Trump in June gave Defense Secretary Jim Mattis and the Department of Defense the power to decide whether or not, and how many, additional American troops would be sent to Afghanistan. The bulk of such a deployment would train and advise Afghans, while some would be assigned to counterterrorism missions against the Taliban and Islamic State.

There are currently about 8,400 troops in the country. Trump would be the third President in 16 tears to surge troops into Afghanistan.