US sends B-1B bombers over Korean Peninsula after North Korea’s ICBM launch, US is ready with ‘lethal and rapid force’

The show of force was in direct response to North Korea’s most recent ICBM test on Friday, which landed in the Sea of Japan but experts say could have reached as far as New York City, based on how long it flew and distance travelled.

U.S. Pacific Command tweeted that “bombers maintain 24/7 strategic forward presence in the Pacific, ready to deter North Korea or any other aggressor.” 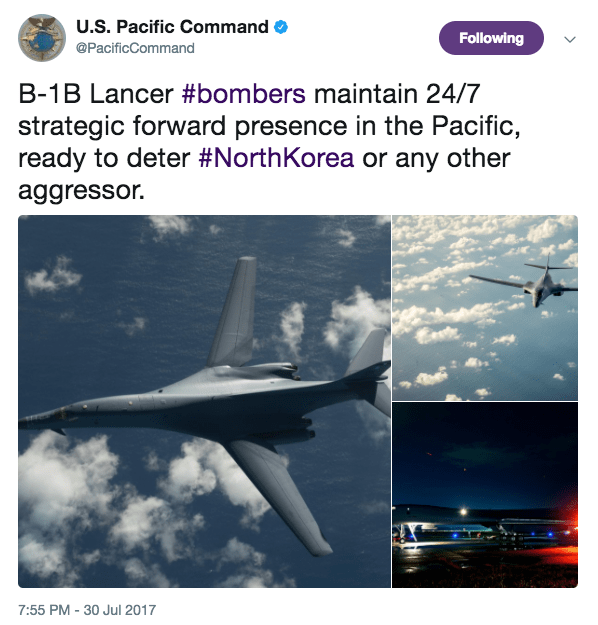 The B-1 bombers took off from Andersen Air Force Base in Guam and joined two Japan Air Self Defense Force Koku Jieitai F-2 fighter jets before flying over the peninsula, where they were also joined by four Republic of Korea Air Force F-15 fighter jets, according to U.S. Pacific Command (PACOM).

“North Korea remains the most urgent threat to regional stability,” said Gen. Terrence O’Shaughnessy, Pacific Air Forces commander. “Diplomacy remains the lead; however, we have a responsibility to our allies and our nation to showcase our unwavering commitment while planning for the worst-case scenario. If called upon, we are ready to respond with rapid, lethal, and overwhelming force at a time and place of our choosing.”

After joining Japanese and Republic of Korean forces, the B-1s “performed a low-pass over Osan Air Base, South Korea, before leaving South Korean airspace and returning to Guam,” PACOM reported. 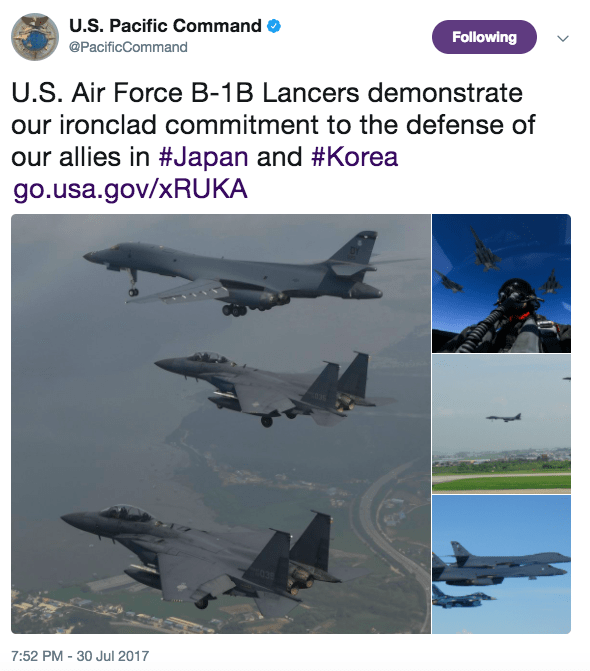 “This mission is in direct response to North Korea’s escalatory launch of intercontinental ballistic missiles on July 3 and July 28,” PACOM reported.

On the eve of July Fourth, North Korea successfully tested its first Hwasong-14 missile, and Kim Jong Un reportedly said there are more “gifts” for the “American bastards.”

PACOM says it maintains flexible bomber and fighter capabilities in the Indo-Asia-Pacific theater, retaining the ability to quickly respond to any regional threat in order to defend the U.S. homeland and in support of allies.