UN Amb. Nikki Haley: Russia and China would be ‘friends’ to North Korea if no retaliation for ICBM

It is looking less likely that there will be an international diplomatic resolution to the threat of North Korean missiles, as U.S. Ambassador to the United Nations Nikki Haley on Wednesday told Russia and China that the U.S. “will go our own path” if the countries do not support new sanctions on North Korea.

The United Nations Security Council met this week for an emergency session to discuss the aftermath following North Korea’s missile test on Monday, when it fired an intercontinental ballistic missile that could potentially reach Alaska, and put the world on notice and frantic over what to do next.

Haley and officials from Russia and China did not see eye-to-eye on Wednesday, as Haley spoke about quelling the missile threats with forcible actions, adding that “time is short.” 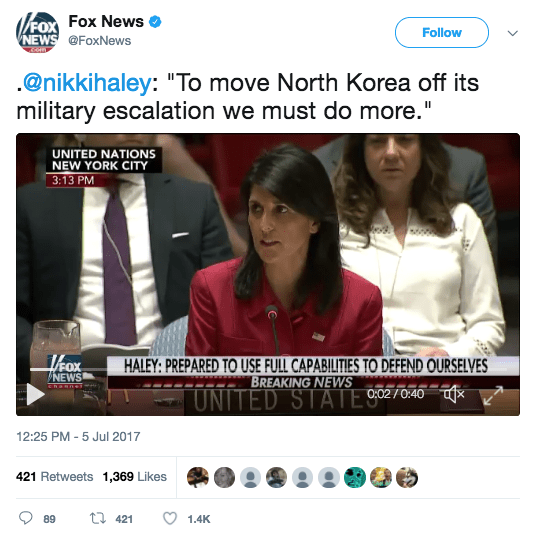 “The international community can cut off the major sources of hard currency to the North Korean regime. We can restrict the flow of oil to their military and their weapons programs. We can increase air and maritime restrictions. We can hold senior regime officials accountable,” Haley told the Council, according to an Associated Press report.

However, in a seemingly opposite reaction, Russia and China said there should be “parallel halt” in military operations by any countries in the Korean Peninsula, including the United States, according to a Wall Street Journal report.

Russia and China have some diplomatic power in the situation, as they are the only two countries – aside from South Korea – who share a border with North Korea, and both countries are permanent members of the U.N. Security Council.

When Russia and China suggested a plan that called for more talk than action, Haley said there should be a vote on the United State’s proposal – even without a U.N. consensus, and that the U.S. would “go our own path” if Russia and China veto the resolution which called for action, according to reports.

“If you are happy with North Korea’s actions, veto it,” she said, according to the Wall Street Journal. “If you want to be a friend of North Korea, veto it.”

“Time is short,” Haley said and also tweeted on July 5. “Action is required. The world is on notice. If we act together, we can still prevent a catastrophe, and we can rid the world of a grave threat.”

“If we fail to act in a serious way, there will be a different response,” Haley added. 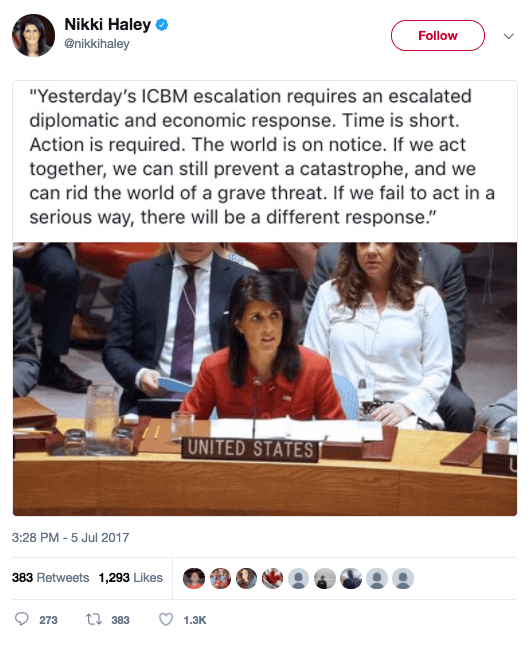 If there is military action against North Korea, and the country fights back, millions of people could potentially die – there are millions of South Koreans who live about 35 miles away from the Demilitarized Zone (DMZ), which separates the two countries. There are also more than 28,000 U.S. troops in South Korea.

A military solution would be “tragic on an unbelievable scale,” according to Defense Secretary Jim Mattis, according to the Wall Street Journal.

General Vincent Brooks, the top U.S. military commander in South Korea, made it overwhelmingly clear during a recent “60 Minutes” interview that the U.S. is ready at a second’s notice to aggressively and overwhelmingly respond to any serious North Korean action.

General Brooks said “it is literally a matter of a decision from North Korea to say ‘go,’ ” and the United States would be at the ready to defend against any missile attacks.

In an interview with CBS’ Bill Whitaker on 60 Minutes, Brooks said any response to missiles launched by North Korea – who has been testing missiles left and right this year – would be “effective and overwhelming.”

“What it takes to go from the condition we’re in at this moment to hostilities again is literally the matter of a decision on North Korea’s side to say fire,” Brooks said. “If North Korea uses nuclear weapons, it will be met with an effective and overwhelming response. Now they can take it to the bank. We make that same point to our allies and partners, like the Republic of Korea and like Japan.”