The Wall Street Journal, CNN and other news agencies are reporting that they have spoken to U.S. defense officials who told them that all seven missing sailors from the collision between the USS Fitzgerald and a merchant cargo ship, the ACX Crystal, have been found dead.

The seven sailors who have died have now been identified.

U.S. Navy 7th Fleet Vice Admiral Joe Aucoin held a press conference around 1:00 a.m. EST early Sunday morning and when asked about body count, he specifically used the words “a number of” bodies but when asked further, he declined to give an exact number of bodies, saying he won’t get into the exact number out of respect for the families as they are being notified.

Aucoin did say that the search and rescue was over.

Aucoin stated, “The damage included a significant impact under the ship’s pilothouse on the starboard side and a large puncture below the ship’s waterline, opening the hull to the sea.”

The Navy will update the public again when all family and next of kin notifications have been made.

You can watch the entire press conference here:

A statement on the U.S. Navy’s website said that remains of a “number” of sailors that have been found and were being transferred to Naval Hospital Yokosuka. The full statement follows:

YOKOSUKA, Japan (NNS) – A number of Sailors’ remains that were missing from the collision between USS Fitzgerald (DDG 62) and a merchant ship have been found.

As search and rescue crews gained access to the spaces that were damaged during the collision this morning, the missing Sailors were located in the flooded berthing compartments. They are currently being transferred to Naval Hospital Yokosuka where they will be identified.

The families are being notified and being provided the support they need during this difficult time. The names of the Sailors will be released after all notifications are made.

A tweet from Master Chief Petty Officer of the Navy, Steven S. Giordano said, “Our Navy family is mourning a loss today. Please keep the families of the fallen in your thoughts and prayers […]” 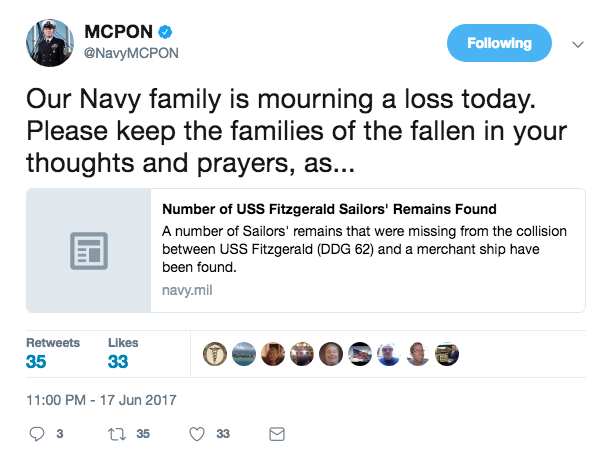 On Saturday, the USS Fitzgerald, a U.S. Navy destroyer, collided with a large Philippine flagged merchant ship, the ACX Crystal, off the coast of Japan around 2:30 a.m. local time. The destroyer, as seen from videos and photos, was heavily damaged on the starboard side and was taking on water. The Fitzgerald limped back to Yokosuka Naval Base and arrived at the base 16 hours later.

The Fitzgerald has 330 crew members. No one was hurt on the ACX Crystal. The Crystal is roughly four times larger than the Fitzgerald. 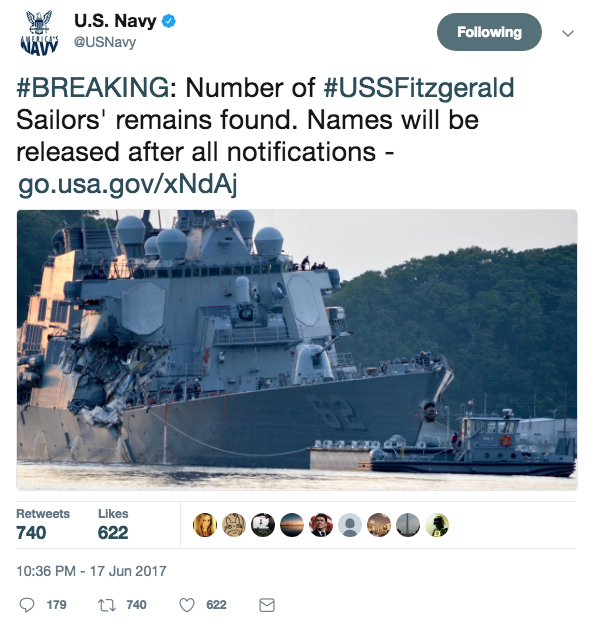 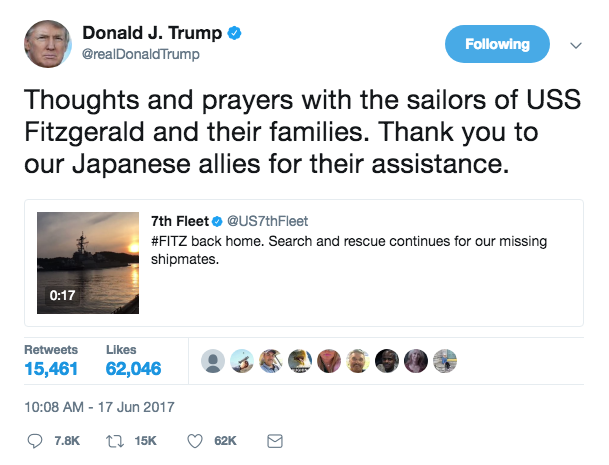 The areas that flooded due to the collision were two berthing spaces, a machinery space and a radio room.

Condolences poured in from across the globe for the deceased sailors and their families:

These are some of Vice Admiral Aucoin’s remarks:

“The damage included a significant impact under the ship’s pilothouse on the starboard side and a large puncture below the ship’s waterline, opening the hull to the sea.

The crew’s response was swift and effective, and I want to point out – as we stand by the ship – how proud I am of them.

Heroic efforts prevented the flooding from catastrophically spreading which could have caused the ship to founder or sink. It could have been much worse.

The crew navigated the ship into one of the busiest ports in the world with a magnetic compass and backup navigation equipment. 1 of 2 shafts were locked.

Because of the tireless damage control efforts of a resolute and courageous team, the ship was able to make its way back to port safely on its own power last evening.

The FITZGERALD Crew responded professionally as all Sailors are expected to fight the damage sustained to their ship. They are known as the “Fighting FITZ” and the crew lived up to that name.

We owe it to our families and the Navy to understand what happened. Under my authority, I am initiating a JAGMAN investigation into this collision, and I will appoint a flag officer to lead that investigation. There will also be a Safety investigation.

The U.S. Coast Guard is to take the lead on the marine casualty investigation.

We recognize that there are other organizations who have equities in this incident, and we expect they will conduct their own separate investigations. More information on any further investigations will be forthcoming.

I will not speculate on how long these investigations will last.

As you are aware, we have found the remains of a number of our missing shipmates. Our deepest sympathies are with the families of these Sailors.

Out of concern for the families and the notification process, I will decline to state how many we have found at this time. We owe that to the families and friends of these shipmates and hope you can respect this process.

We will update you after all notifications have been made.

We have transferred remains to Naval Hospital Yokosuka. The families are being notified and will be provided the support they need at this difficult time. Please keep them in your thoughts are prayers.

Their loved ones are what makes this Navy great, so this loss is something we all do feel. The names of the deceased will be released soon.

Unfortunately we don’t have the details regarding the conditions during their final moments, but hope that the investigation may shed some light on that matter.

At the same time, I want to express my most heartfelt appreciation to our Japanese allies for their swift support and assistance.

Japanese Coast Guard ships and helicopters were the first on scene and our first medevac, the ship’s commanding officer, Cmdr. Bryce Benson, was accomplished thanks to a JMSDF helicopter.

A second medevac was performed for two Sailors with minor injuries. All three patients are alert and under observation at Naval Hospital Yokosuka.

We set up a USS Fitzgerald Emergency Family Assistance Center within hours, and disseminated the phone numbers to their hotlines through social media and Navy websites.

This support center remains open for chaplain and counselor care indefinitely, 24/7, on the Fleet and Family Support Center’s 4th floor.

But to be clear: my sole focus now has shifted to helping the grieving family, crew and friends of the Fitzgerald.

The Navy family comes together during a tragedy, and I want to thank the entire Yokosuka community rallying their support in these difficult days. Fellow Sailors, family members, and civilian members of the Navy team were all out here last night to welcome FITZGERALD home and provide the crew and grieving families with food, blankets, clothes, and emotional support. MWR, Port Operations, NEX, USO, the Chief Petty Officer Mess, and many others pulled together to help out.

I ask all of you to keep the affected families in your thoughts and prayers, and respect their privacy as we work to get them the answers they deserve regarding their loved ones.”