Report: A Few Unarmed London Community Police Ran Away From Terrorists Leaving Citizens Alone To Fight & Throw Chairs At Them

During Saturday night’s terrorist attack that killed six and injured more than 30 others, there were reports of some community police running away from the terrorists, leaving citizens to defend themselves – which they did by throwing chairs. Then afterwards, other police stormed in and shot “straight away,” according to reports.

The community police fleeing is separate from an incident that took place immediately following the attack on the London Bridge, when a British Transport Police officer went after the three terrorists with nothing but a baton; he suffered knife wounds.

This was the first time the London Police issued its new warning for citizens to “run, hide, tell” – to run away from any threat, rather to surrender or negotiate. Then citizens should hide, silence their phones and ensure they are barricaded in before calling police.

But citizens in one restaurant reportedly fought back after community police ran, using chairs and pint glasses on the attackers.

Lisa O’Carroll with The Guardian was on-scene and reported:

“Guardian reporter Lisa O’Carroll is at Borough Market, where she says multiple stabbings have been reported:

“The guy with the knife was killing two people. We were shouting ‘stop, stop’ and people threw chairs at them. Police came and shot straight away.”

Another staff member from Fish said: “I saw two people in Breadhead bakery, they had blood on them, they were civilians. I never expected to see this happen here.”

Neither wanted to give their names.”

The Guardian tweeted this development out, along with other updates: 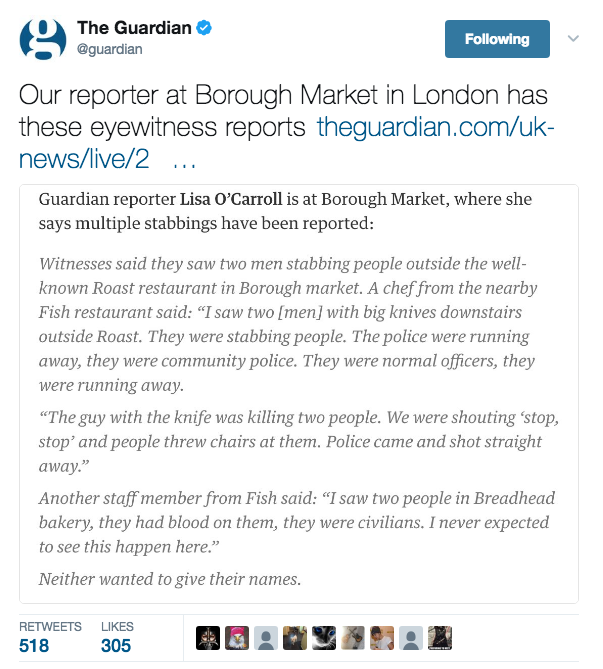 Since the attack, UK Prime Minister Theresa May has come out and stated that there is “far too much tolerance of extremism” in the UK, and that she may want longer prison sentences for terror convictions.

May also took an aggressive tone, saying, “enough is enough,” and that “we need to become far more robust in identifying it [terror ideology] and stamping it out across the public sector and across society. That will require some difficult, and often embarrassing, conversations.”

“But the whole of our country needs to come together to take on this extremism, and we need to live our lives not in a series of separated, segregated communities, but as one truly United Kingdom,” May said.

May also talked about regulating the internet, saying “[w]e cannot allow this ideology the safe space it needs to breed,”… “Yet that is precisely what the internet and the big companies that provide internet-based services provide.”

“We need to work with allied democratic governments to reach international agreements that regulate cyberspace to prevent the spread of extremist and terrorism planning… We need to do everything we can at home to reduce the risks of extremism online,” May said. 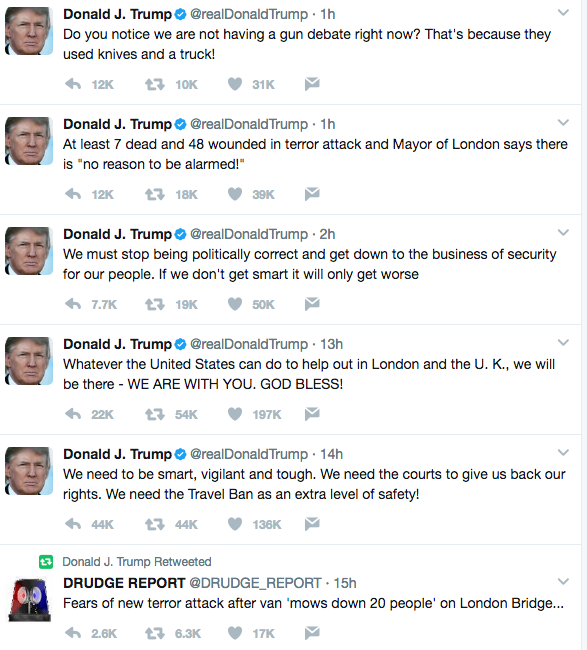 London Mayor Sadiq Khan said Sunday that “[w]e are all shocked and angry today, but this is our city… We will never let these cowards win, and we will never be cowed by terrorism.” 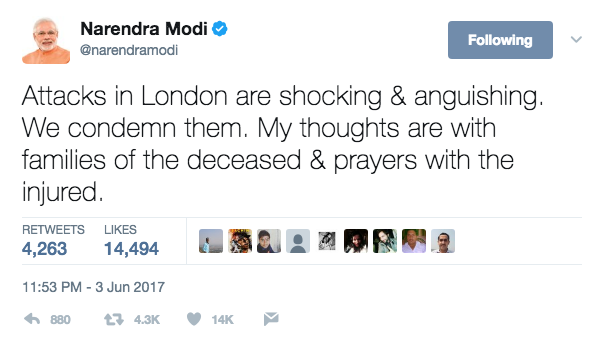