Several news agencies recently pushed out reports that the USS Fitzgerald might be to blame for the deadly collision earlier this month, but they all referenced one unverified account that was initially reported by Reuters.

According to a Reuters report of an unverified account from the cargo ship’s captain, the ACX Crystal container ship that collided with the USS Fitzgerald off the coast of Japan, killing seven sailors, might have sent warning signals to the Navy ship.

Reuters reported that the U.S. ship might have failed to respond to the signals, “according to a copy of [ACX Crystal] Captain Ronald Advincula’s report to Japanese ship owner Dainichi Investment Corporation that was seen by Reuters.”

The captain’s report and account had not been individually verified by Reuters at the time, and several other news agencies reported this information, referencing Reuter’s unverified report.

A Navy spokesman told American Military News on Monday that the Navy is aware of the report and that it would not comment on the initial findings at this time, as there will be several aspects of the investigation to follow. 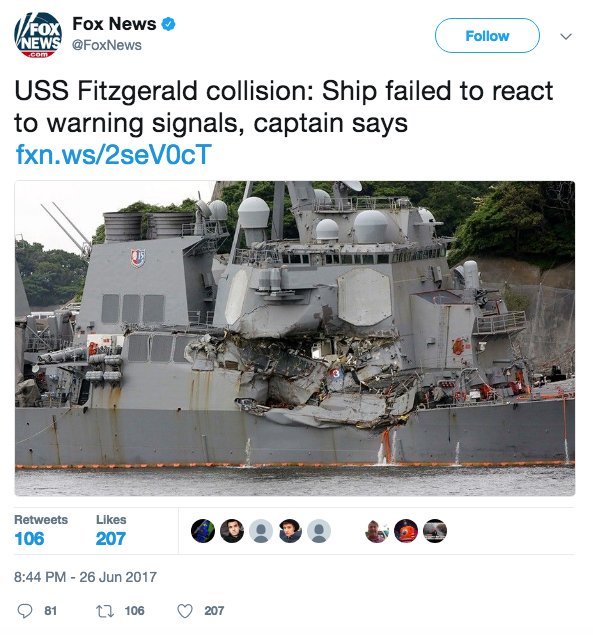 Last week it was reported that the Philippine-flagged freighter that hit a U.S. Navy destroyer was on autopilot at the time of the collision, according to officials who are familiar with the result of a preliminary investigation into the incident, according to a report.

“In the first detailed account from one of those directly involved, the cargo ship’s captain said the ACX Crystal had signaled with flashing lights after the Fitzgerald ‘suddenly’ steamed on to a course to cross its path,” Reuters reported Monday.

“The container ship steered hard to starboard (right) to avoid the warship, but hit the Fitzgerald 10 minutes later at 1:30 a.m. [local time],” according to the report.

The ACX Crystal, a large Philippine-flagged merchant ship, ran into the USS Fitzgerald off the coast of Japan earlier this month, and seven sailors died. 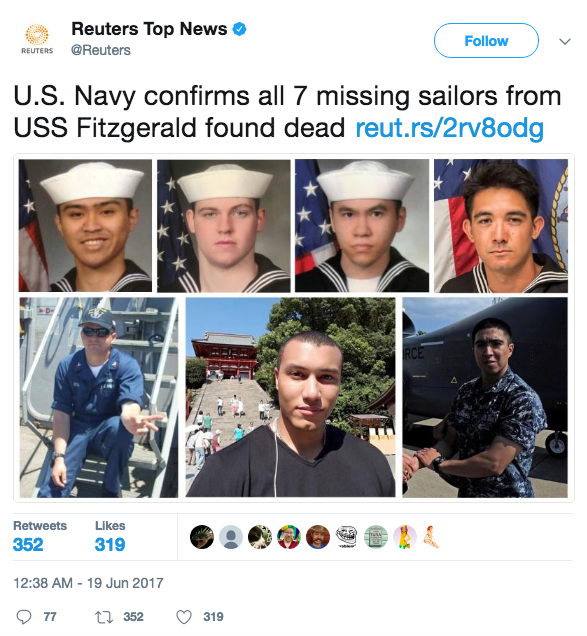 On Tuesday morning, the U.S. Navy 7th Fleet tweeted about its moment of respect honoring the seven sailors who died. 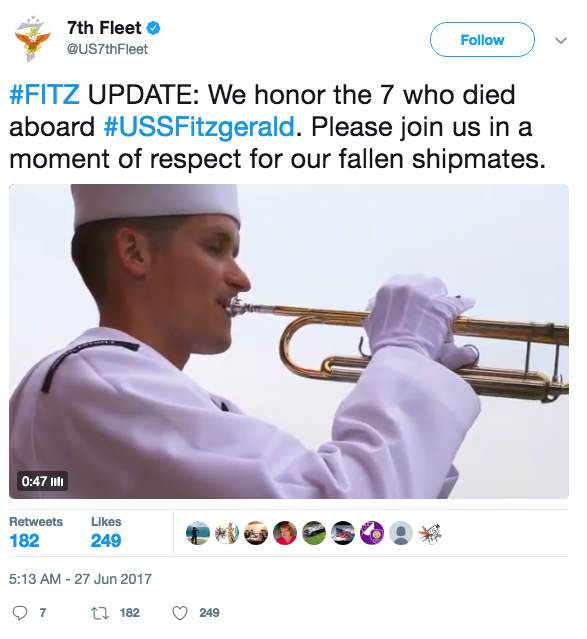 The Crystal is a mid-size ship container, coming in at 730 feet long with the ability to carry up to 2,858 shipping containers.

After the collision last week, the heavily-damaged Fitzgerald went back to Yokosuka Naval Base in Japan.

The Navy and Coast Guard are investigating the incident.

“Multiple U.S. and Japanese investigations are under way into how the guided missile destroyer USS Fitzgerald and the much larger ACX Crystal container ship collided in clear weather south of Tokyo Bay in the early hours of June 17,” Reuters reported.