The mother of a U.S. Navy sailor said her son continued to dive after his shipmates in an effort to save their lives following a collision between the Navy destroyer, the USS Fitzgerald, and a Philippine-flagged container on Saturday.

Mia Sykes told the Associated Press that her son, Brayden Harden, 19, tried to save the lives of his shipmates until air pockets in his sleeping berth began running out.

Sykes told the Associated Press that her son told her that three people in the sleeping berth above him died and four people in his own berth died as a result of the collision. 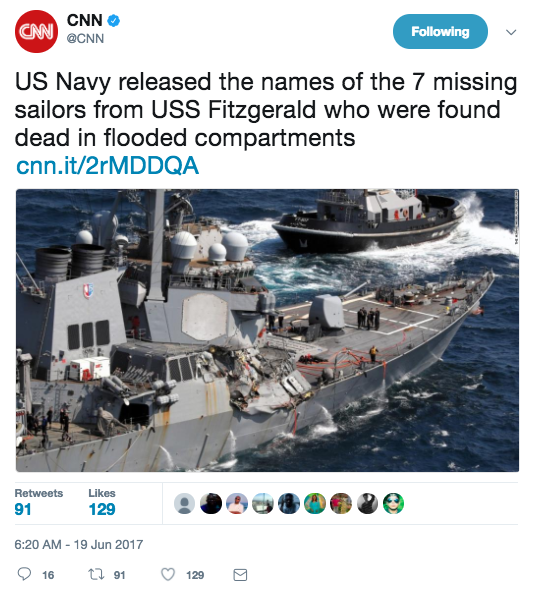 “They did what they were trained to do,” Sykes told the Associated Press. “You have to realize most of them are 18, 19 and 20-year-olds living with guilt. But I told him, ‘There’s a reason you’re still here and make that count.’ ”

Around 2:20 a.m. local time on Saturday, the USS Fitzgerald collided with the ACX Crystal, a container ship that weighs roughly four times as much as the Navy destroyer.

The U.S. 7th Fleet said in a statement that the crash damaged two berthing spaces, a machinery room and the radio room. The majority of the nearly 300 sailors aboard would have been asleep at the time.

“The water flow was tremendous, and so there wasn’t a lot of time in those spaces that were open to the sea. And as you can see now, the ship is still listing, so they had to fight the ship to keep it above the surface. It was traumatic,” Vice Adm. Joseph Aucoin, the commander of the 7th Fleet, said at a news conference, the Associated Press reported. 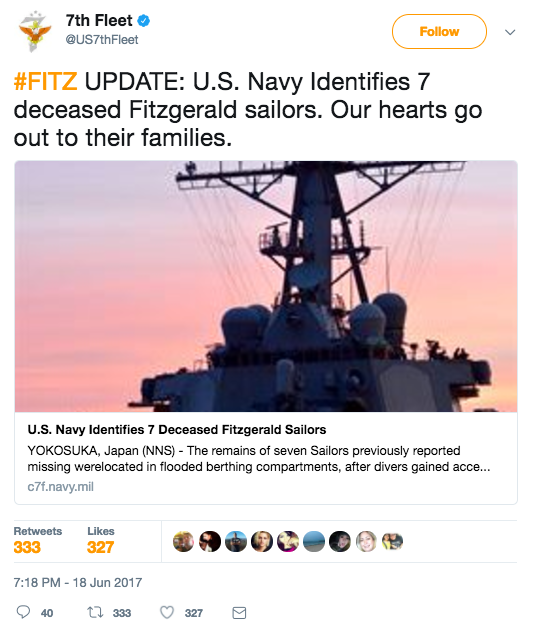 “We are all deeply saddened by the tragic loss of our fellow shipmates as a result of Friday’s collision between USS Fitzgerald and a commercial container ship, and our thoughts and prayers are with their families,” said Acting Secretary of the Navy Sean Stackley. “As details emerge, we can all be proud of the heroic effort by the crew to tend to the needs of those injured and save the ship from further damage while returning safely to port.”

A retired Navy Captain who wished to remain unnamed told American Military News that “In the middle of the night large cargo ships can look like land on the horizon. Most likely someone on watch screwed up and someone will be relieved of duty.”