The President’s personal attorney intends to file a complaint against former FBI Director James Comey, who yesterday testified before the Senate Intelligence Committee that he leaked his own memos that detailed conversations with the President to a “close friend,” according to reports.

Marc Kasowitz would file a complaint with the Justice Department Inspector General and Senate Judiciary Committee.

During Comey’s testimony before the Senate committee on Thursday, it was revealed, among many things, that Russia did meddle in the 2016 Presidential election, but that President Donald Trump was not being investigated by the FBI, nor did the President obstruct the investigation.

The President tweeted on Friday that Comey vindicated him, “despite so many false statements and lies.”

After Comey’s firing on May 9 for his handling of the investigation into Russia, and the subsequent tweets from Trump where the President threatened there may be “tapes” of their conversations, Comey asked a “close friend” to leak memos to the media detailing his conversations with President Trump.

The President tweeted on May 12 that Comey “better hope that there are no ‘tapes’ of our conversations before he starts leaking to the press!” 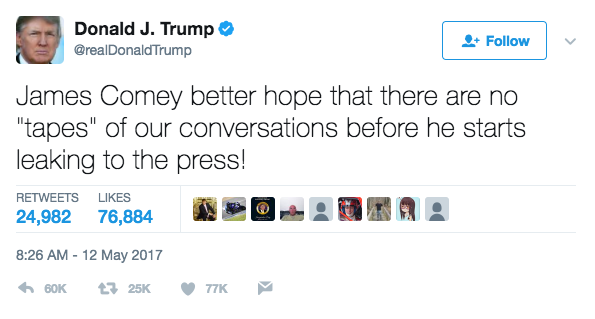 “Lordy, I hope there are tapes,” Comey said during his testimony on Thursday.

Comey asked Columbia law professor Daniel Richman to leak the memos with the hope they would trigger a special counsel appointment. The next day, Robert Mueller was named as Special Prosecutor.

Richman confirmed to the Huffington Post this week that he was the “close friend” who leaked the memo to the media.