CNN Controversy: Some Say This Video Proves CNN Was Faking & Staging An Anti-ISIS Muslim Protest In London After Terror Attack

In a hostile media environment when every move is under scrutiny – especially following the recent terrorist attacks in the United Kingdom – one media giant is being accused by some of artificially fostering racial environments, despite the terror attacks and the U.K.’s growing problems with keeping its country and citizens safe.

CNN is facing criticism over a video that shows what appears to be veteran reporter Becky Anderson orchestrating Muslim protestors behind her live shot from London over the weekend. While it is not uncommon for live news casts to have people standing in the background, it is the topic of who those people are, rather than their presence alone, that has sparked a conversation.

In the video, several Muslim women and some children file in behind a large pole and some white barricade tape, where Anderson stands preparing to go on camera. The women are directed to stand in certain spots by Anderson and others on the near side of the tape.

The Muslim protestors seen in the YouTube video were reportedly rallying support for London Police and their brave actions during the weekend’s tragic events.

There was a second terror attack in London in just two weeks over the weekend, where six people died and more than 30 others were injured in a multi-stage attack that began with a van mowing people down on London Bridge. On May 22, the Manchester Arena suicide bomber killed 22 adults and children, and injured many others, after an Ariana Grande concert.

CNN told Mediaite that allegations the Muslim crowd was staged are not true.

“This story is nonsense,” CNN said. “The group of demonstrators that was at the police cordon was being allowed through by officers so they could show their signs to the gathered media. The CNN crew along with other media present simply filmed them doing so.”

CNN’s “Reliable Sources” host Brian Stelter tweeted that those on the “far right” are “misleading folks about this video” when bloggers say “CNN was caught ‘staging fake news.’ ”

In reality, Stelter tweeted, “Police allowed demonstraters thru cordon ‘so they could show their signs’ to media, [CNN] says. CNN, BBC, CP ‘simply filmed them doing so.’ ” 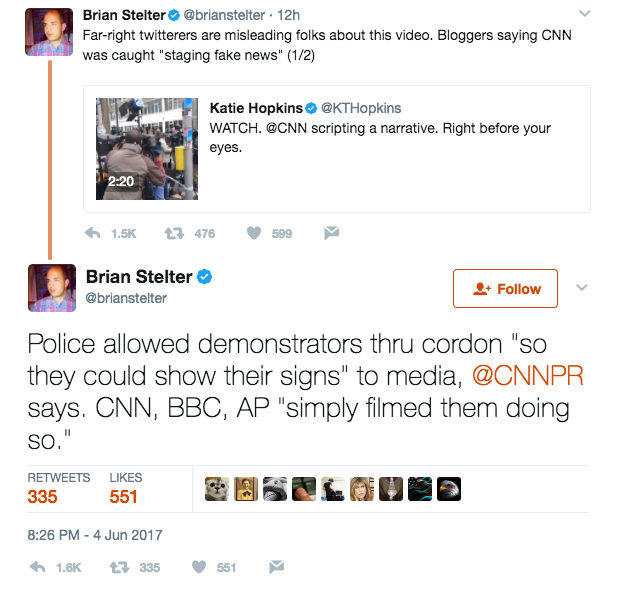 CNN Public Relations responded to a tweet with the following statement, saying allegations of the network “faking” the Muslim protest are “nonsense.” 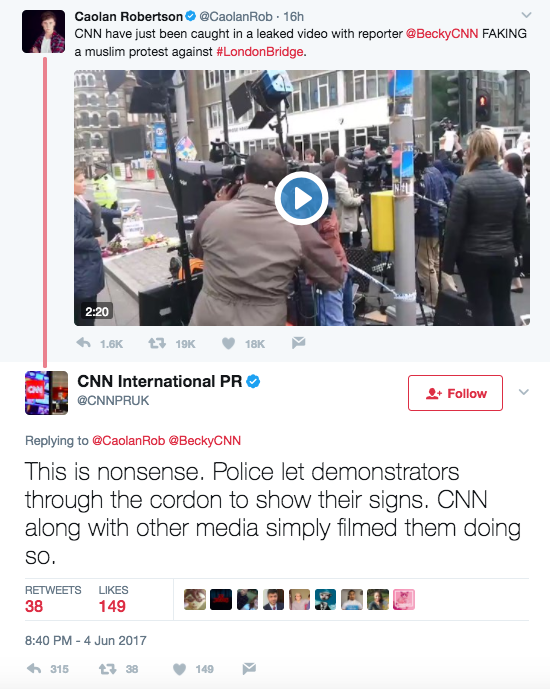