Attorney General Jeff Sessions: It’s an ‘appalling and detestable lie’ to suggest he had interactions with the Russians

U.S. Attorney General Jeff Sessions said that the suggestion he was involved in “any collusion to hurt this country” is an “appalling and detestable lie” when he appeared before the Senate Intelligence Committee on Tuesday.

The Committee is investigating the alleged Russian hacking of the 2016 Presidential election. Sessions opened his remarks on Tuesday with “such interference can never be tolerated.”

Last week, former FBI Director James Comey testified before the same committee that Russia allegedly hacked the Presidential election, and that President Donald Trump was not being investigated as part of the probe, nor did he “obstruct” the investigation or ask it to be ended.

It had been reported that Sessions, who served as Chairman of the Trump Campaign’s National Security Advisory Team for then-candidate Donald Trump, allegedly met with Russian ambassador Sergey Kislyak twice in March, and there were public reports of Sessions having a possible third meeting with the Russians at the Mayflower Hotel on April 27, 2016, when then-candidate Trump gave his first foreign policy speech.

“I have never met with or had any conversation with any Russians or any foreign officials” concerning any campaign or election in the United States, Sessions told the committee on Tuesday.

“I don’t have any recollection of meeting or talking to Russian ambassadors and officials,” Sessions said. “If any brief interaction occurred, I do not remember it.”

Sessions recused himself from the Justice Department’s investigation into Russia meddling in the election on March 2 of this year because he felt he was required to, under the rules of the Department of Justice.

The attorney general was sworn in on February 9 and had his first meeting the next day, February 10, to discuss the issue of the investigation in his new role as Attorney General. 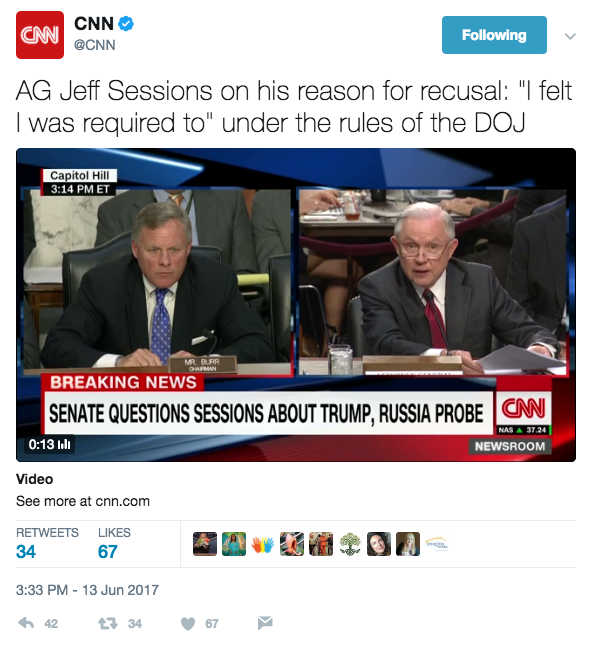 During the time in between that meeting and his formal recusal, Sessions was “never briefed on any investigative details” and “did not access information regarding the investigation,” Sessions told the committee.

Sessions said that while he recused himself from the investigation, he “did not recuse myself from defending my honor against scurrilous allegations.” 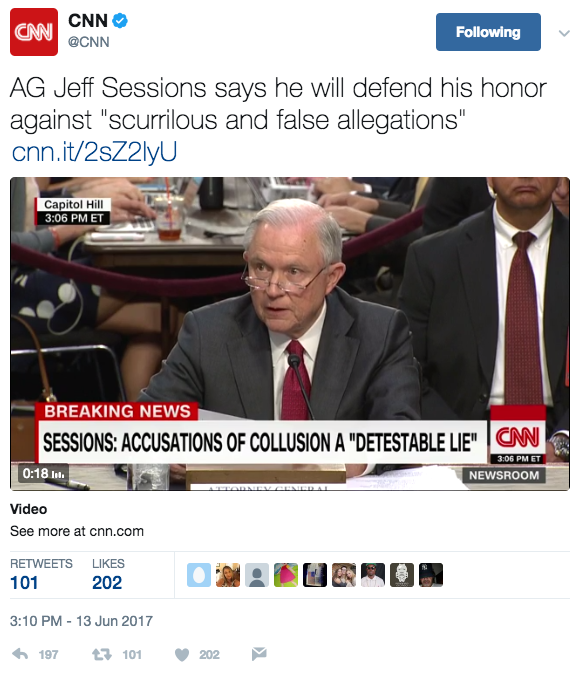 Sessions appeared before the Senate Intelligence Committee on Tuesday, although he was originally scheduled to testify in front of the House and Senate Appropriations committees; he cancelled those appearances to testify at the intelligence committee hearing.

Sessions pointed out that the scope of his recusal from the Russia investigation “does not and will not affect my ability to oversee the Department of Justice,” which includes the FBI – and its $8 billion budget.

“These false attacks, innuendos, leaks […] you can be sure will not intimidate me,” Sessions said. “They have only strengthened my resolve to do my duty … [to] reduce crime.”

“We’re telling the gangs, cartels, fraudsters and terrorists: we are coming after you,” Sessions added. “Every one of our citizens has the right to be safe in their homes and their communities.”

The U.S. Navy Could Be Bigger, Stronger, And More Lethal In Just 5 Years