According to anonymous sources that spoke with the Washington Post, President Donald Trump allegedly leaked classified information about ISIS to the Russian ambassador and prime minister during their meeting last week. The leak reportedly jeopardized an ISIS intelligence source, the Washington Post broke late Monday.

The story has since been widely covered, with emphasis on the President jeopardizing “a critical source of intelligence on the Islamic State,” according to the Washington Post.” The information the president relayed had been provided by a U.S. partner through an intelligence-sharing arrangement considered so sensitive that details have been withheld from allies and tightly restricted even within the U.S. government, officials said.”

Trump’s disclosure of the highly classified information to the Russians “endangers cooperation from an ally that has access to the inner works of the Islamic State,” the Washington Post reported.

Following the meeting, the White House was on damage control duty, contacting the CIA and National Security Agency (NSA), the Washington Post reported.

” ‘This is code-word information,’ said a U.S. official familiar with the matter, using terminology that refers to one of the highest classification levels used by American spy agencies,” according to the Washington Post. “Trump ‘revealed more information to the Russian ambassador than we have shared with our own allies.’ ”

According to National Security Adviser H.R. McMaster, “The president and the foreign minister reviewed common threats from terrorist organizations to include threats to aviation. … At no time were any intelligence sources or methods discussed, and no military operations were disclosed that were not already known publicly,” he said, according to the Washington Post.

Secretary of State Rex Tillerson released a statement, saying that “[d]uring President Trump’s meeting with Foreign Minister [Sergey] Lavrov a broad range of subjects were discussed among which were common efforts and threats regarding counter-terrorism. During that exchange the nature of specific threats were discussed, but they did not discuss sources, methods or military operations,” according to a Vox article.

The Russian Foreign Ministry said Tuesday that reports about the President leaking classified information are “fake news,” according to the Independent.

President Trump took to Twitter on Tuesday to defend his meeting with Russian officials and what was discussed. 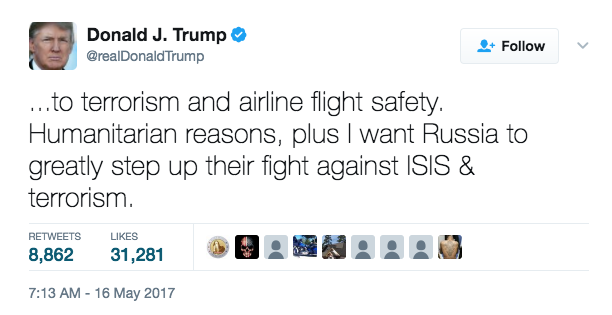 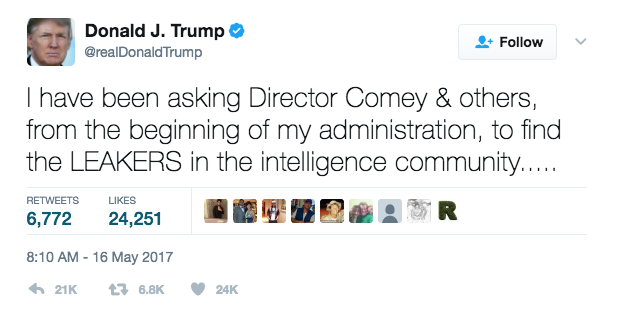 “As President I wanted to share with Russia (at an openly scheduled W.H. meeting) which I have the absolute to do, facts pertaining…. …to terrorism and airline flight safety. Humanitarian reasons, plus I want Russian to greatly step up their fight against ISIS & terrorism,” the President tweeted.

Then, about an hour later, he left readers with an open-ended, suggestive tweet: “I have been asking [former FBI] Director [James] Comey & others, from the beginning of my administration, to find the LEAKERS in the intelligence community….. ”

The president last week fired Comey from his post as the nation’s top crime fighter, citing a lack of confidence.