“You’re fired” is a phrase President Donald Trump is not afraid to use, whether on reality television or in the White House.

But there is growing concern about its use, particularly after the latest person on the other end of that statement was the nation’s top crime fighter and now-former FBI Director James Comey, who was told Tuesday that he no longer has a job. Comey joins a growing list of top officials fired by the Trump Administration.

News broke earlier this week that the President fired Comey – who had reportedly requested more resources to pursue his investigation surrounding Russia’s possible meddling with the recent U.S. election just days before his firing, according to the Associated Press.

There are those who have speculated that the investigation and its alleged closeness to the President is the real reason why Comey was fired, not for stated reasons, which were reportedly lack of confidence in the director.

“Trump is the first president since Richard Nixon to fire a law enforcement official overseeing an investigation with ties to the White House,” according to the AP.

Then, on Wednesday, the President took to Twitter to defend his actions and slam Democratic Sen. Richard Blumenthal (D-CT), even referring to him as “Richie” as he handed down not one, but three tweets worth of jobs at the man.

From his keyboard, the President first defended his firing of Comey, claiming the director had “lost the confidence” of many people.

“James Comey will be replaced by someone who will do a far better job, bringing back the spirit and prestige of the FBI,” the President tweeted on May 10.

A second tweet followed: “Comey lost the confidence of almost everyone in Washington, Republican and Democrat alike. When things calm down, they will be thanking me!”

The President also bashed Blumenthal, the Democratic senator who is on the record admitting he “misspoke” about his military service in the past.

This week on CNN, while being interviewed by Anderson Cooper, Blumenthal said that the President firing Comey “may well produce impeachment proceedings” in the future, adding “although we’re very far from that possibility.”

The President did not let the comments slide. 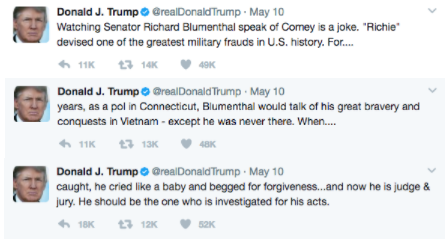 “Watching Senator Richard Blumenthal speak of Comey is a joke. ‘Richie’ devised one of the greatest military frauds in U.S. history. For years, as a pol in Connecticut, Blumenthal would talk of his great bravery and conquests in Vietnam – except he was never there. When… caught, he cried like a baby and begged for forgiveness… and now he is judge and jury. He should be the one who is investigated for his acts.”

This is not the first time the President has taken someone to task via Twitter, as his strong opinions expressed in 140 characters or less has become a signature of his Presidential personality.