VA Executives Receive $3.3 Million In Bonuses As Quality Of Care Continues To Decline 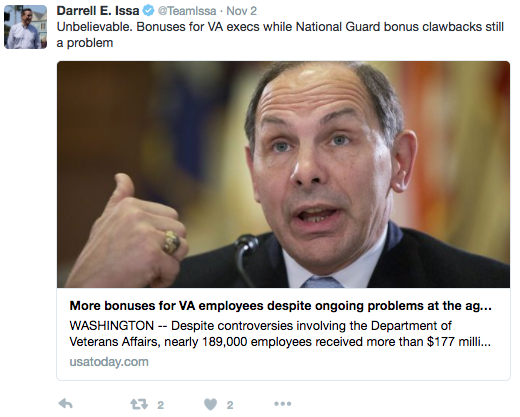 The news of the bonuses have caused discontent among veterans who have received subpar treatment due to claims that the VA cannot afford to higher additional staff or renovate facilities. Veterans have seen their fellow veterans die after being placed on extremely long waitlists, have been forced to receive treatment at roach-infested facilities, or have been left to decompose for months in morgues after dying.

The VA’s performance review practices have been called into question as a result. More than half of the VA’s employees received bonuses, a 20 percent increase from 2014. Even poorly performing executives that have were fired for “negligent performance of duties and failure to provide effective oversight” received bonuses. Approximately 70 percent of VA employees were rated “outstanding” or “excellent” despite a general dissatisfaction among veterans that have utilized their services.

Dan Caldwell, vice president of policy and communications at the Concerned Veterans for America, commented on the issue. He said:

“The bonus entitlement mentality at the VA should offend the veterans still struggling to receive basic health care as well as the hard-working American taxpayers propping up this broken system,”

He went on to say that the bonuses being awarded to VA employees haven’t resulted in higher quality healthcare being delivered. Rep. Jeff Miller, R-Fla., chairman of the House Veterans’ Affairs Committee also weighed in by stating that the VA handing out bonuses to employees during times of mass discontent among veterans shows the VA cannot be trusted to fix the problem on its own.

Opposition to the bonuses has been compounded by the National Guard announcing that they expect National Guard soldiers to repay enlistment and education bonuses that were erroneously awarded to them in 2010.