Last week, President-elect Donald Trump announced that his pick for the next CIA Director was Congressman Mike Pompeo, a Republican from Kansas who was a West Point graduate, a U.S. Army Soldier and a businessman years before he was a politician. Pompeo has spent his entire career in Congress as being a staunch advocate and defender of the truth, not afraid to give fellow representatives or government officials on either side of the aisle the third degree in order to get answers for the American public he so proudly represents. Pompeo held steadfast to getting answers from Hillary Clinton and her involvement in the 2012 terrorist attack in Benghazi as well as her inappropriate use of a private e-mail server during her tenure as Secretary of State, which had many in the Democratic party trying to label him a “partisan” member of Congress. The criticism has never swayed Pompeo’s desire for a more transparent government however, and his extraordinary efforts to better understand the Iran Deal lead him to be the first to uncover that the Administration was involved in secret side deals with the Islamic Republic.

In July 2016, Mike Pompeo sat down with American Military News to discuss one of the many issues that the Congressman had with the nuclear deal, specifically what was being hidden by the Administration. A year to the day of the Iran Deal being implemented, Pompeo told American Military News about the troublesome secret side deals he and Senator Tom Cotton found while trying to get a meeting with the International Atomic Energy Agency (IAEA) in Vienna.

“We were asking questions about the deal.  We were very concerned about what America was doing entering into an agreement with the ayatollah and in the course of asking questions about how the heck we were gonna inspect all of the former nuclear sites of the Iranians we asked what the process was going to be and the IAEA was very plain.” Pompeo continued, ” They told us there were two side deals that the American people were never gonna get a chance to see.”

“We found that deeply disturbing” he said, and acknowledged that he thinks it was the first moment that anyone outside of the deal heard that there were secret side deals included the JCPOA (Joint Comprehensive Plan of Action). 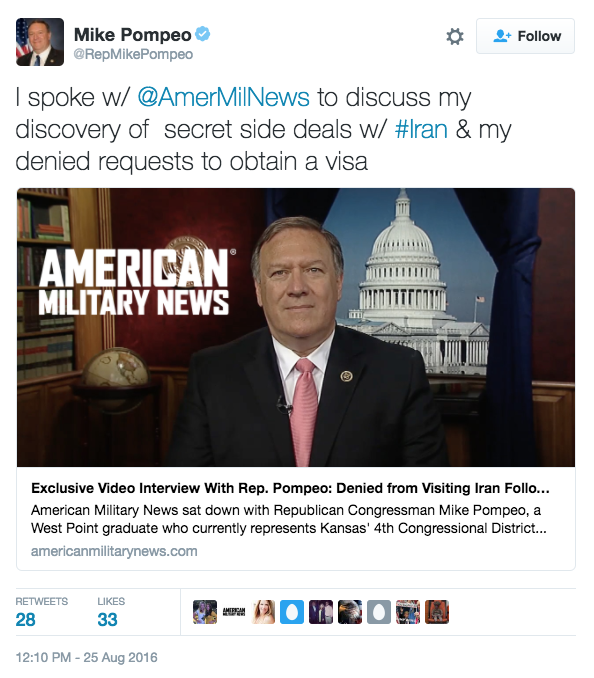 At the time the interview was conducted, neither the American people nor Pompeo and his fellow Congressmen were able to know what was in the secret side deals. It wasn’t until September that the side deals were exposed, showing that the Obama Administration made allowances for Iran to skirt restrictions outlined in the deal in order for them to meet their deadlines. The administration continuously lifted sanctions for the Islamic Republic claiming that they were complying with all the elements of the agreement, however they were actually letting them get a pass. 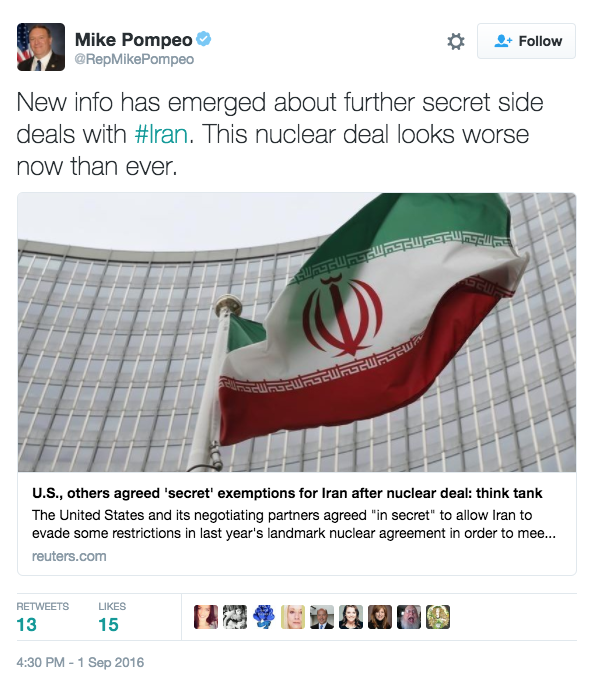 Pompeo explained that he took his job seriously and did his duty to read and understand the deal so he could be the best representative between the deal and the American people, however, because of the secrets withheld from Congress, he was unable to complete his task in entirety.

“I had read the deal many, many times.  I understood the agreement at a pretty sophisticated level, at least I thought, and so to learn that the documents that I had been presented by my own Government weren’t complete,” he said, “my first reaction was to be surprised and confused because I had understood what I had been able to read was the entire deal.  It turns out it was not.”

Pompeo also explained that he was forbidden from obtaining a visa to visit Tehran to conduct congressional oversight on Iran and their nuclear situation but were denied, further prohibiting him from doing his job as a representative of the American people. Pompeo said he planned on continuing the fight and would keep pushing the Iranian foreign ministry to let him in.

“It seems like a very reasonable ask,” he said, “when it’s the case that you are trying to negotiate further arrangements with our government, you’re trying to get our government to help you accomplish many of the tasks that Iranians want done to let members of Congress who have the duty to spend money and to spend it responsibly on behalf of the tax payers to let them go see what’s really going on.”

In terms of what needs to come next with America’s dealings with Iran, Pompeo said: “Step one is to push back on Iranian terror and Iranian expansion all around the world.  Step two is to fundamentally renegotiate the understanding between our two countries.  We are happy to help the Iranians develop a peaceful nuclear program for energy in their country.” However, he specified that they “can’t enrich, can’t spread terror, and they can’t foment their expansionist efforts to spread the governorate of the Islamic Republic of Iran around the world.”

His tough stance against the Iran Deal and Iran itself is what has many on the left arguing that he is a “hardliner,” however it’s Pompeo’s tough stance and passion for finding the truth that many would find appropriate and needed for him to be the next CIA director.