A report released Thursday by the Washington-based Institute for Science and International Security confirms that the United States and its negotiating partners in the creation of the Iran Deal made secret deals which allowed Iran to skirt the restrictions implemented on their nuclear program so that they could meet a deadline.  The information for the report was provided by several government officials who had involvement in the negotiations, though the Institute’s President, David Albright, would not identify the officials.

The P5+1, which refers to the UN Security Council’s five permanent members: China, France, Russia, the United Kingdom, and the United States; plus Germany, agreed on “secret deals” that allowed Iran to get a pass on some components of the deal they had not yet met in order to meet a deadline which would allow it to start getting relief from economic sanctions. According to the report, Iran exceeded the 300 kilogram limit on low-enriched uranium that was imposed yet were allowed to continue forward with getting the economic sanctions lifted.

White House Spokesman Josh Earnest responded to questions about the report Thursday during a press briefing stating that: “The implementation date was driven by the ability of the (International Atomic Energy Agency) to verify that Iran had completed the steps that they promised to take. That is what precipitated implementation day. Since then Iran has been in compliance with the agreement.”

The Institute for Science and International security took to Twitter to respond to Earnest saying: “No. Earnest needs to read what we wrote. We said exemptions allowed Iran to be in compliance by Implementation Day.” 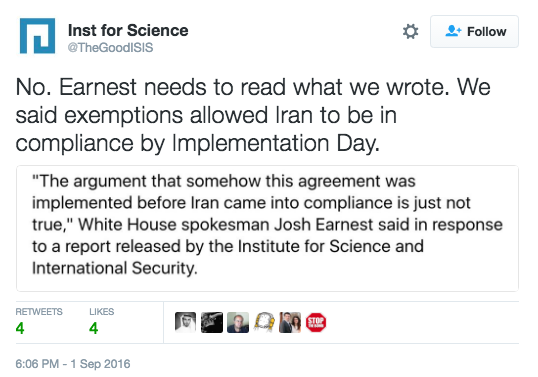 The group’s website states: “we have learned that some nuclear stocks and facilities were not in accordance with JCPOA limits on Implementation Day, but in anticipation the Joint Commission had earlier and secretly exempted them from the JCPOA limits. The exemptions and in one case, a loophole, involved the low enriched uranium (LEU) cap of 300 kilograms (kg), some of the near 20 percent LEU, the heavy water cap, and the number of large hot cells allowed to remain in Iran. One senior knowledgeable official stated that if the Joint Commission had not acted to create these exemptions, some of Iran’s nuclear facilities would not have been in compliance with the JCPOA by Implementation Day.”

David Albright told Reuters, who first reported on the investigation findings, that “exemptions or loopholes are happening in secret, and it appears that they favor Iran.”  Albright is a former U.N. weapons inspector who, according to the group’s website, “has written numerous assessments on secret nuclear weapons programs throughout the world.” 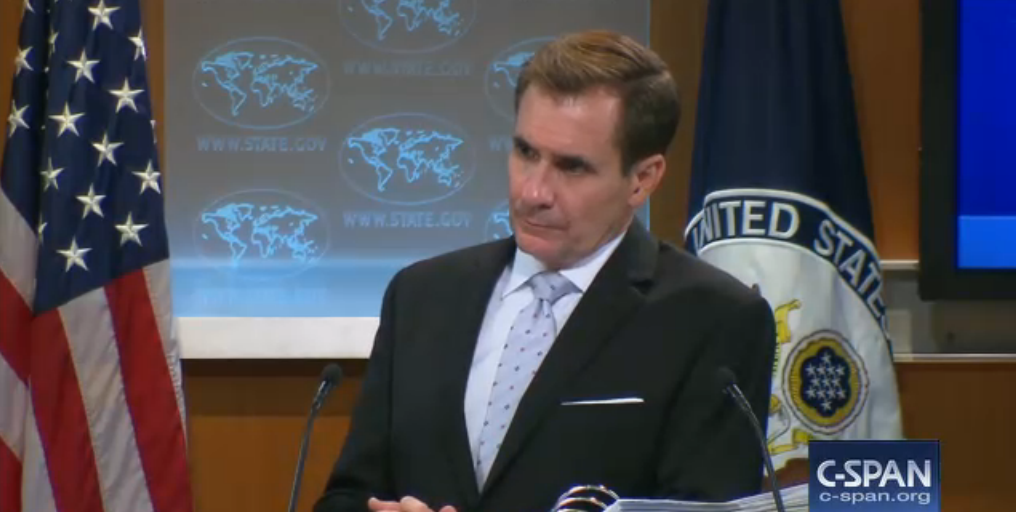 When asked about this new report on Thursday, State Department Spokesman John Kirby was reluctant to answer questions often referring to the joint commission’s work as “confidential.”  Arguing with reporters over “semantics” and “word-play” of “exceptions” and “exemptions,” Kirby left off the discussion stating, “since implementation day, they’ve been in compliance, with the exception of that one time when there was an excess of heavy water.”

American Military News recently spoke with Congressman Mike Pompeo on the secret side deals the P5+1 made with Iran, though at the time he nor his colleagues new what they consisted of. 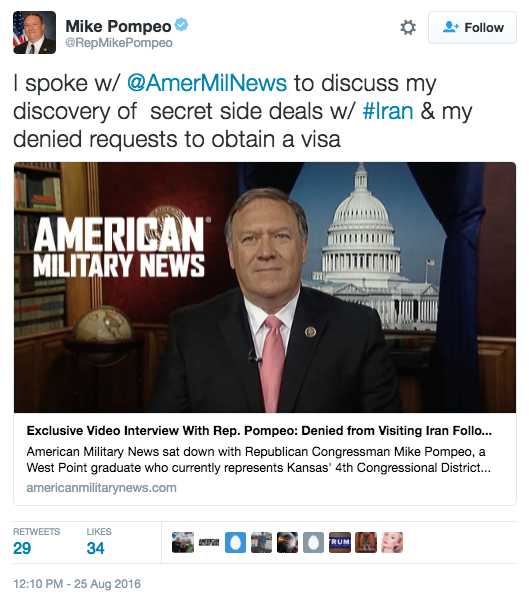 The Clinton campaign has yet to comment on the report.