Video has surfaced of U.S. special forces being forced to flee a northern Syrian town after Free Syrian Army (FSA) fighters became perturbed at their presence and threatened to “slaughter” them for what they believe to be an “invasion”. In the video below FSA fighters can be heard chanting “pigs”, “crusaders”, and “infidels” at the American troops.

Other members of the FSA can be overheard saying “Down with America”, “‘Get out you pigs”, “They are coming to Syria to occupy it” calling the troops “Dogs, agents of America.” A man on a megaphone or overhead speaker can be heard saying that there will be a “slaughter” if the troops do not leave.

Watch the chilling video footage for yourself below:

The video first surfaced on Twitter on Friday. Men in U.S. military uniforms and alleged american armored vehicles can also be seen. Sources claim that the video takes place in the city of al-Rai. 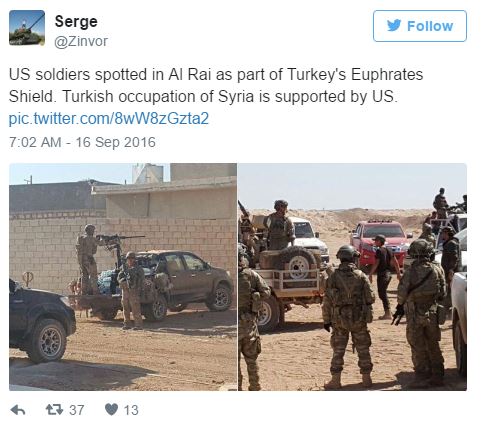 After massive protests the U.S. forces decided to leave the city for their own safety. The video has surfaced shortly after U.S. government officials announced they will be sending an additional 40 special forces troops to aid Turkish soldiers in Syria.