Iran’s Supreme Leader: “No US Gov’t Can Be Trusted” And Iran’s Enemies Will Receive “Overwhelming Blow”

Ayatollah Khamenei, referred to as Iranians as the “Supreme Leader”, spoke out aggressively against enemies, specifically the United States, who try to hold them down and keep them from building the military power to defend themselves.  Khamenei conveyed the importance of the country’s Air Force as the first line of defense. 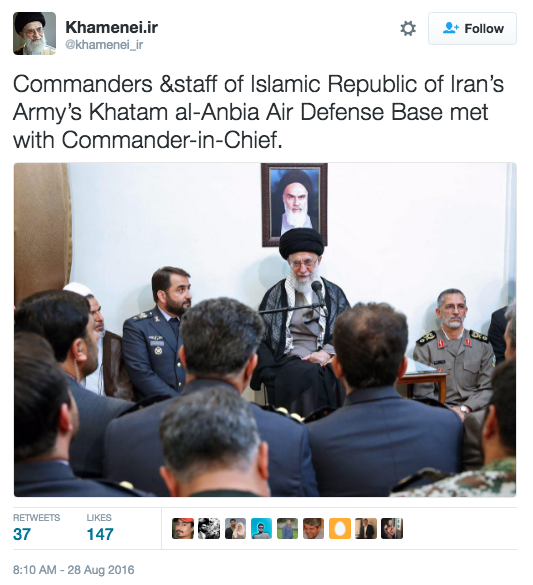 The leader of the Islamic Republic praised his own country’s defense capabilities while viciously exonerating the U.S. and the Obama Administration for showing hostility towards their nation.  The Ayatollah Khamenei said, “Our enemies are made up of the global arrogance and the world Zionism, the dirty natured and deceitful camp with tyrannical ideology. They have resentment to the Iranian religious beliefs, independence and the non-compromisory spirit of Iranian nation.”

“Once the hostility is represented in the form of the US administration and another day in the form of such tyrannical regime as Saddam;” he continued, “but what’s of importance is that we should use many capacity available to the country and identify the stances and plans of the enemy to make right decision to thwart the threats.”

He continued by speaking about the S-300 Russian missile system that they recently received, claiming that the defensive system could not be used for offense yet the U.S. opposition to their acquisition to the system showcases the American’s hostility towards Iran.

‘The S-300 system is defensive and not offensive. However, Americans did their best to prevent Iran from taking delivery of such a facility.” He said. “We face such an enemy that does not recognize any right of defense for our nation. In fact, it says you should remain defenseless so that when we wish we can invade you.”

The Ayatollah Khamenei has been outspoken about his opposition to the United States in recent days.  Just last week the leader of the Islamic Republic said in a meeting with Iranian President Hassan Rouhani and his cabinet ministers in Tehran that “no U.S. government can be trusted.”

“This experience teaches us that promises by no US government can be trusted and nothing concrete should be done in lieu of their promises,” he said.  “My criticism pertains to the Joint Comprehensive Plan of Action (JCPOA), non-commitment and the evilness of the other side and it has nothing to do with our own officials because the negotiators have made round-the-clock efforts at their best and we appreciate these efforts.”

After a year of the JCPOA being put into place, the Ayatollah Khamenei continues to build resentment for the U.S. stating that “the Americans want to take everything in return for nothing. Negotiations with such a government mean diversion from the correct path of the country’s progress, making repeated concessions and bearing their bullying, violations and disloyalty in practice.”

Despite criticism from U.S. citizens thinking the Obama Administration has been more than lenient with the Iranians: allowing them to have nuclear capabilities, giving $400 million cash for the release of hostages, etc., the Ayatollah continues to believe that the administration is far too overbearing for the Islamic regime.  The comments also come on the heels of Iranian Foreign Affairs Minister Mohammad Javad Zarif’s controversial week long trip to Latin America to build relations with America’s Southern neighbors.