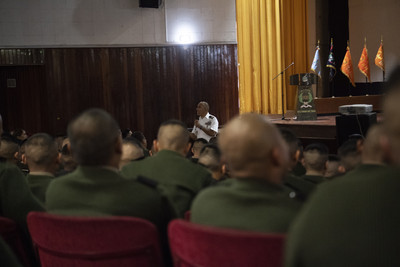 Through a continuous partnership with U.S. Army South (ARSOUTH), members of the West Virginia National Guard and subject matter experts in the Center for the Army Profession and Ethic (CAPE) and Not In My Squad (NIMS) programs teamed up to deliver training to the Peruvian Army’s (PERAR) non-commissioned officer corps Sept. 10th through 14, 2018 in Lima, Perú.

During the week-long engagement, U.S. service members focused on working with the senior enlisted leaders of the Peruvian Army to facilitate courses on leadership, empowering the NCO corps, professionalism, ethical behavior, physical fitness, NCO development and gender integration for more than 500 PERAR soldiers.

In separate sessions, Nelson and Monaco engaged directly with more than 50 females in the Peruvian Army for physical readiness training to instill esprit de corps between the two countries’ militaries and highlight the importance of gender integration, equality in the military and how NCO leadership molds U.S. forces.

“In regards to gender integration and NCO professional development, we are one team. We are all a family. North or South America, it makes no difference,” said Monaco. “After this week, the Peruvian Air Force is looking to do the same thing and the Army is ready for us to come back with more U.S. females and change the foundation for their future. This week was history making and couldn’t have been more successful. Un equipo, una pelea.”

“As a West Virginia Guardsman, being able to have a lead role in shaping the future for the NCO corps in Perú is a high point in my career,” said Nelson, who serves as the WVNG’s pubic affairs officer. “Not only that, but working with our Army counterparts from the active component highlights the total force capability to influence change with our international partners.”

In addition to discussions on improving gender integration in the PERAR, the core construct for the week related to NCO professional development. While the Peruvian military has a large NCO corps, it does not traditionally hold the leadership responsibilities and standards of training and education associated with NCOs in the United States military.

Each day, members of the U.S. delegation presented courses to the PERAR on the basics for the U.S. Army’s core values and expectations for advancement. Each session allowed for a question and answer period for direct feedback between PERAR senior enlisted leaders and NCOs and U.S. forces.

Guillén, the WVNG’s State Partnership Program coordinator and Peru native, presented on the importance of a strong officer and NCO relationship, the joint working relationship between the Army and Air Force in the National Guard and his experiences as a Senior NCO in the Army.

“There are many ways to leave a legacy and that’s definitely by being a good leader. Good leadership helps you mentally, professionally, technically, tactically and physically,” said Guillen. “What I saw was a group a PERAR soldiers willing to adapt and willing to learn the new ways of working together as one for a better today.”

He added that the State Partnership Program (SPP) is a terrific program that connects outstanding West Virginians and the Republic of Perú’s military forces together for important engagements and partnership building. West Virginia and Perú have been linked together through the SPP since 1996.

As a part of the NIMS workshop, the PERAR NCOs were able to brainstorm ideas and highlight issues in the organization, without senior enlisted or officers in the room, to present to their leadership with recommendations for change. PERAR NCOs were empowered to recognize issues within their unit, develop courses of actions and deliver their ways forward to their respective leaders who can implement change or produce a resolution.

“In the last few days, I’ve come to realize that Peruvian Army is eager to develop their NCO Corps,” said Colon. “This week, the U.S. Army gave them the right tools to do so. In this engagement, we influenced the women in the Peruvian Army to seek leadership and self development. We opened many doors for them to grow in their military life an also in their civilian life and made an impact in the future growth of the NCO corps as a whole.”

This engagement is a part of an ongoing series between ARSOUTH and PERAR, based on a 2016 memorandum of understanding signing, designed to provide a foundation for institutional change to education and leader development within the PERAR NCO corps.