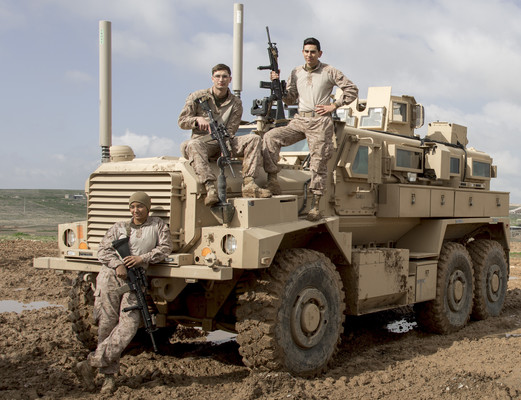 Today is motor stables—a kind of “field day”—cleaning and maintenance for the platoon’s trucks. The Marines inventory equipment, chip away layers of hardened mud from tire wells, identify mechanical issues and ensure the vehicles are ready for employment at a moment’s notice.

One of the trucks has a suspected brake issue, which has to be resolved before the next patrol goes out. But since none of the Marines with India Co. are certified mechanics, they bring issues to the attention of U.S. Marine Corps Sgt. Naomi Polumbo and her team. A few hours later, the truck is repaired and back in its assigned spot amongst the vehicle lineup.

Polumbo is a motor transport mechanic with Combat Logistics Detachment 34, temporarily assigned to India Co. for more than two months working as a mechanic and is a leader of the wrecker recovery team. Operating with one Medium Tactical Vehicle Replacement wrecker, her team is responsible for lifting and towing armored vehicles such as the MRAP and mine-resistant, ambush-protected all-terrain vehicle.

Prior to this, Polumbo served at Marine Corps Base Camp Pendleton, California with 1st Maintenance Battalion. If that seemed far from her small hometown of Hopewell, Virginia, the distance pales in comparison to the 6,643 miles now between her and home. But the distance doesn’t bother her too much,because Polumbo volunteered to deploy, and she’s working in a field that she’s enjoyed for many years.

“I love working on cars,” Polumbo explained. “I actually worked on cars with my dad prior to joining the Marine Corps. He was a tank mechanic when he served in the Army. He was happy to hear that I was going to be a mechanic as well.”

Upon graduation from recruit training and Marine Combat Training in 2015, Polumbo attended the three-month long Motor Transport Mechanic School at Camp Johnson, North Carolina and discovered there’s a distinct difference between being a Marine Corps’ motor transport mechanic and working on cars back home.

“I was learning to fix trucks and heavy equipment,” said Polumbo. “7-tons, wreckers, MRAPs, MATVs,” she said with a laugh. “When I was working on cars, I could just look something up on the internet if I had a question. Unfortunately, you can’t YouTube a 7-ton.”

After Camp Johnson, Polumbo learned new skills and trained with her fellow mechanics in Camp Pendleton. When the opportunity presented itself to deploy, she took it without hesitation.

“I really wanted to come out here.” Polumbo said. “I wasn’t sure if I was going to re-enlist, but I didn’t want to say that I had been in the Marine Corps—training to deploy—and then never had the opportunity to actually to do my job. It was a personal goal.”

A goal that she has accomplished in more ways than one. Polumbo volunteered to deploy with SPMAGTF-CR-CC, but didn’t realize how often her team would be called upon to assist operations. Although the mechanics of CLD-34 went through rigorous training prior to the deployment, the austere environment offered a fresh set of challenges; fewer resources and limited spare parts to make repairs.

“I love the independence and knowing that I’m doing my job in a real-world setting,” said Polumbo.

That setting required that the mechanics operate in ever-changing conditions – including outside the camp. When a vehicle became inoperable during a convoy, it was up to them to get the crew and asset back safely.

“Without us, they would have been stranded,” said Polumbo. “When we arrived, identified the problem and towed them back without any major issues—it was a good feeling.”

In addition to an unfamiliar environment, she’s also one of only two female Marines embedded with India Co. This has added yet another facet to her experience; a positive one.

“Working with the infantry and artillery Marines has been a great experience,” Polumbo explains. “They’re very willing to learn. They’re aggressive with learning how to fix a truck! If I show them something once, they remember it. These guys are smart, polite, and friendly.”

Polumbo and her team have become essential to India Co.’s mission by more than a means of vehicle recovery. They are treated as members of the India Co. family.

“I didn’t really know what to expect coming out of here; you hear a lot of negative comments about ‘grunts,’ said Polumbo. “The Marines of India Co. were great to work with. I would absolutely do it again.”

Polumbo, CLD-34, and India Co. have completed many patrols in the Middle East. Even though she’s unsure of what the future has in store for her, Polumbo acknowledges that after this experience, re-enlisting is still on the table.