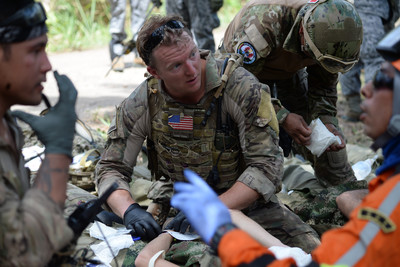 “This has been an excellent opportunity to train with our partner nations,” said U.S. Air Force Col. Brett Howard, 12th Air Force (Air Forces Southern) Angel de los Andes U.S. lead. “We’ve had many challenges, [but] what we were able to learn, is how to overcome those challenges together for mission success.”

A U.S. Air Force C-17 Globemaster III and a C-130 Hercules transported 506 passengers from all partner nations, moved 86.4 tons of cargo and airdropped 72 multinational personnel total during the exercise, while also transporting simulated victims of the exercise scenarios.

“We did some low altitude low level training. To get to go practice ridge crossings, flying though valleys and mountainous terrain was cool experience because it’s not something we get to do very often in Minnesota,” said U.S. Air Force 1st Lt. Matt Bair, 133rd Airlift Squadron, Minnesota Air National Guard C-130 co-pilot. “Anytime that we can come down here take advantage of the local terrain and practice in a low level environment, we really appreciate it.”

The Colombian Air Force has participated in numerous U.S. Air Force training exercises in the past years to include: Angel Thunder 2014, Green Flag 2016, Mobility Guardian 2017, Red Flag 2012 and 2018.

“The significant importance of the U.S. being here is that we have the opportunity to strengthen our relationship so we can be prepared to confront the future threats together,” said Colombian Air Force Chief of Staff Gen. Carlos Eduardo Bueno Vargas.

This is the second time the Colombian Air Force has hosted this exercise since 2015. Six nations participated in the exercise and six countries observed. Colombia plans execute Angel de los Andes exercise again in three years.